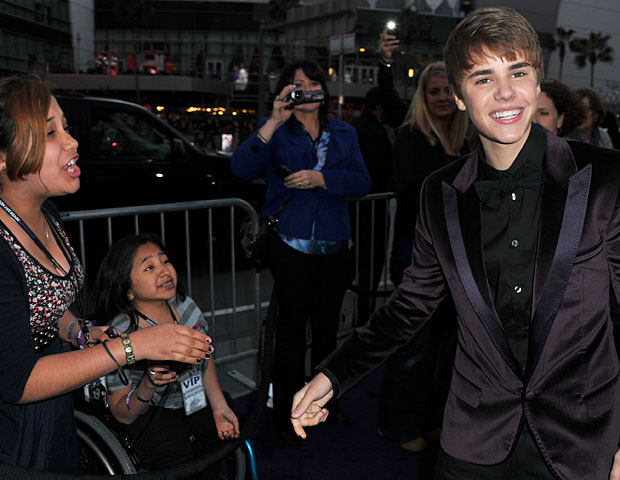 Tinseltown came down with Bieber fever on Tuesday, when hundreds of Justin Bieber fans — along with his famous friends Miley Cyrus, Will Smith, Usher and Selena Gomez — filled the L.A. Live complex for the premiere of the teen pop star's first movie, "Justin Bieber: Never Say Never."

The mostly 'tween and teen crowd, many in homemade T-shirts proclaiming themselves to be Bieber's No. 1 fan, packed the LA Live plaza hours ahead of the screening, hoping for a star sighting.

"We just wanted to see if we could get a glimpse of Justin," said 15-year-old Hanna Hamersley, who wore a purple hand-painted T-shirt, a homemade Justin Bieber headband and purple "Never Say Never" 3-D glasses.

Part concert film and part biopic, "Never Say Never" tells the story of Bieber's rise from a small-town street performer to a bona fide pop sensation with hit songs, a best-selling book and more than seven million followers on Twitter. It shows a young Bieber pounding away on the drums and busking on the streets of Ontario, Canada, before rising to fame through YouTube and Twitter, and eventually performing at Madison Square Garden.

"It was the greatest movie ever," said 13-year-old Hanna Zeile. "I would watch it over and over."

Indeed, Hanna and her two friends said they planned to see the movie again on Wednesday and on Friday, when it opens nationwide.

"I loved all the baby videos and footage of him as a kid," Bella said. "He had no music lessons as a kid. That really inspired me."

"I was very impressed," she said. "I didn't know he had such raw, true talent."

Bieber's fans — who call themselves "Beliebers" — play a big role in "Never Say Never." They're shown throughout the film in their T-shirts, singing along with his songs and crying from sheer joy at seeing him in person.

Fans in the theater screamed and waved glow sticks during the 3-D concert footage, just like fans at his actual concerts. (Movie-bound parents: Bring earplugs.)

"I'm so happy I have such amazing fans," Bieber said as he introduced the film. "Tonight isn't even about me. It's about spreading the message that anything is possible."