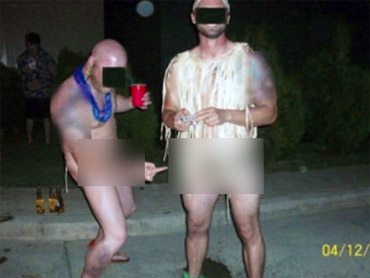 The private security contractor hired to protect the U.S. Embassy in Afghanistan said Monday it erred by not immediately telling the State Department about an alcohol-related incident involving its guards that proved far more serious than company officials first believed.

"I am not here to defend the indefensible," said Samuel Brinkley, vice president of Wackenhut Services, the company that owns the contractor, ArmorGroup North America.

A manager for ArmorGroup counseled nine guards after they got drunk at a bar near their living quarters in Kabul on August 10. But after photos surfaced showing the guards had been at a party where ArmorGroup employees engaged in lewd and inappropriate behavior, they realized they made a mistake by not alerting U.S. officials. Photos showed guards and supervisors in various stages of nudity at parties flowing with alcohol.

Brinkley said the manager's response, which included a temporary ban on alcohol, seemed adequate at the time.

"In retrospect, we were wrong in not notifying the State Department," Brinkley said in testimony before the independent Commission on Wartime Contracting.

Also at the hearing, a member of a federal commission investigating wartime spending said the photos may be as damaging to U.S. interests in Afghanistan as images of detainee mistreatment at Abu Ghraib were in Iraq.

Dov Zakheim, a former Pentagon comptroller, said the photos are circulating heavily on the Internet and give Muslims in Afghanistan a negative image of the United States and make the jobs of American officials there all the more difficult.

Patrick Kennedy, under secretary of state for management, told the commission the State Department is very concerned about ArmorGroup's delays in reporting its knowledge of any misconduct by its employees.

The State Department has been sharply criticized for its management and oversight of the security contract at one of the country's most important diplomatic outposts. In addition to the allegations of misconduct, other problems have included a shortage of guards and inferior equipment.

As the department's top management officer, Kennedy said he takes full responsibility for having failed to prevent the problems that reportedly ranged from out-of-control parties to Armor Group supervisors frequenting brothels in Kabul.

The State Department has launched an investigation into ArmorGroup's handling of the $189 million contract embassy security contract.

Kennedy told the commission that the misconduct "dishonored" the State Department in Afghanistan, where "the success of U.S. objectives depends on the cultural sensitivity of all mission personnel, including employees under contract."

But he and other State Department officials said no decision will be made on whether to terminate the contract with ArmorGroup until the investigation is complete.

Kennedy also insisted the safety of department personnel working at the embassy has never been compromised because of ArmorGroup's failures.

Members of the commission pressed Kennedy to be more aggressive, saying the evidence already available is enough to warrant firing ArmorGroup, which was awarded the contract to protect the embassy in March 2007.

"To me, it's just totally out of control and it's been going on for a long time," said Michael Thibault, co-chairman of the commission.

Commissioner Clark Ervin asked Kennedy to pledge to terminate the contract if the investigation proves all the allegations prove to be true.

Kennedy refused to commit, saying the inquiry needs to run its course. However, Kennedy added, "We are seeing a very, very serious case being made for termination."

Kennedy insisted the safety of department personnel working at the embassy has never been compromised because of ArmorGroup's failures.

Brinkley told the commission that he is "personally embarrassed" by the incidents that have become public in the last two weeks. In addition to the August 10 incident, Brinkley cited in his testimony two others inn which ArmorGroup guards acted inappropriately.

Brinkley said he and other company executives were unaware of a June 15 party at Camp Sullivan, the guards' living quarters near the embassy, until an independent watchdog group in Washington issued a report with photos detailing ArmorGroup's problems in Afghanistan.

ArmorGroup was awarded the Kabul embassy security contract in March 2007. Wackenhut acquired ArmorGroup in May 2008.

In his testimony, Brinkley described ArmorGroup as a "troubled" company when Wackenhut bought it.