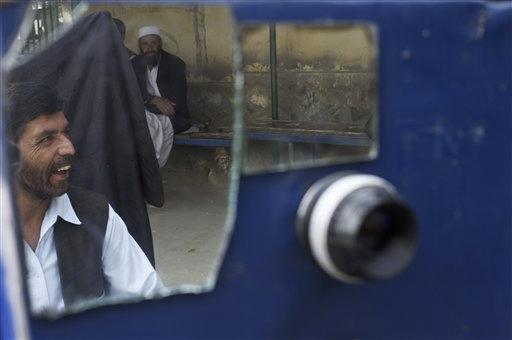 KABUL, Afghanistan (AP) - As his workday begins, Mia Mohammed walks down a dusty street, a bulky contraption on his shoulder. He stops in front of a hospital and puts down the box, setting its battered wooden legs on the edge of the street.

His back to the morning sun, the slim, taciturn 37-year-old man fishes a small lens from his pocket and screws it carefully into one end of the wooden box. He places two trays of chemicals and some paper inside. Then he closes the lid and sets up a chair facing the box.

One of Kabul's last street photographers is open for business.

Not long ago, camera stands were a common sight in Afghanistan's capital. With a government enamored of bureaucracy, Afghans need passport-size photos for nearly everything: school, work, even hospital admissions. And the only way to get those photos was to sit very still on a chair in the street and stare at a lens poking out of a homemade box.

But today dozens of photo shops provide color prints with the click of a mouse. Photographers such as Mohammed are all but gone, victims of the digital age.

"I know of no others," he said, his hand resting almost protectively on top of the red, vinyl-covered box that has been his source of income for more than a decade. He sold it recently and replaced it with a blue one.

His business, though, is coming to an end. His supplier of photographic paper no longer stocks it, because of dwindling demand. When his last two boxes are finished, he expects he will be too.

He despairs for his future. Not only are digital cameras too expensive for him, but he is illiterate and fears he could not adapt.

"I know how this one works completely," Mohammed said, tapping his hand against the box.

A former tenant farmer, he became a street photographer about 15 years ago, after he stepped on a land mine and lost his left leg below the knee. The International Committee of the Red Cross orthopedic hospital, which treated him, lent him some money to buy a camera so he could earn a living. Since then, he has worked right across the street.

By 9 a.m. on a recent morning he already has a line of customers.

His subject sitting before him, Mohammed retreats behind the box to look through a wooden hatch that functions as a viewfinder. To focus, he uses a metal bar to slide a glass pane until the picture is sharp. Next he slips his arm into a sleeve that hangs from the box and pushes the photographic paper in front of the pane. With an elegant flourish of the hand he removes the lens cap, capturing the image.

It takes about 10 minutes for him to develop the negative. He then shoots a picture of the negative to make a positive, producing a pair of scratchy, blurry photographs that he hands to his waiting customers.

They leave with sepia images that make them appear like their 19th-century ancestors. But none seems to care. What is important is the convenience and the price: 10 Afghanis (about 20 cents) for two pictures. Digital shops charge at least four times that much.

"If you want color you have to go into the city center and we want to be done quickly, so this is better," said Aziz Ullah, gripping the handles of his 12-year-old daughter's wheelchair. She is paralyzed from the waist down, the result of a spinal injury, and had an appointment at the west Kabul hospital.

On an average day, Mohammed earns $6 to $7 from patients who need photos for registration forms. It's just enough to support his wife and four children. He doesn't know what he'll do once his job is done.

"When I had the accident that disabled me it really shook me up and I don't learn easily any more. It's hard to get used to something new," he said.

But on this day, Mohammed stows his much-loved box in a hospital shed and covers it tenderly with a cloth. Soon it will be obsolete - a forgotten item taking up space in a corner. And something unique will have faded away, like an old photograph left out in the light too long.