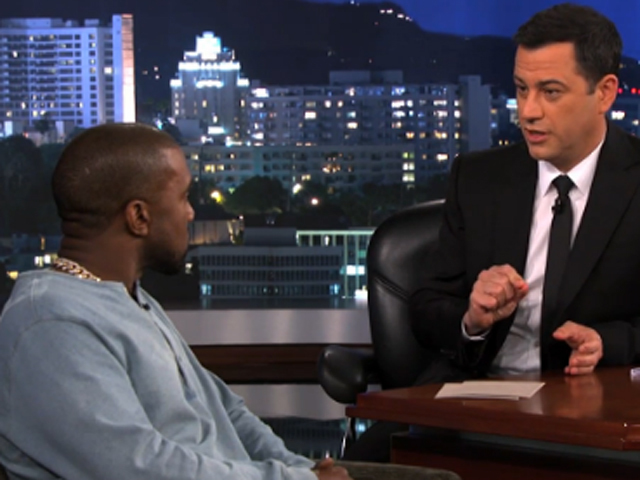 Speculation that the rapper's anger over a "Jimmy Kimmel Live" parody skit that mocked him was staged was immediate after West lashed out at Kimmel in late September. But both said that their beef was authentic during a 30-minute interview on Wednesday night's show in which West discussed a range of topics including his artistry, paparazzi, family, fashion and the idea of celebrity.

At one point during the visit, West turned to the camera and said, "Everyone out there...needs to know I've never done a publicity stunt in my life...I don't follow rules like a normal celebrity or what their publicists tells them to say or anything like that. I don't do publicity stunts. Period. So don't ever think that."

Kimmel started off thanking West for coming on the show. The host said early in the interview that he knows West personally and always found him friendly, but that he seems misunderstood.

"I don't know if you know this, but a lot of people think you're a jerk," Kimmel said after West called himself a genius. West was objecting to the idea that he's "just a celebrity."

"When you said you think you're a genius, I think that upsets people," Kimmel said. "But the truth is a lot of people think they're geniuses, but nobody says it because it's weird to say it. But it is most certainly more honest to say, 'I am a genius.'"

"I'm totally weird and totally honest and I'm totally inappropriate sometimes, and the thing is for me not to say I'm not a genius I'd be lying to you and to myself."

The fight broke out the day after Kimmel hired a child actor to portray West in a recreation of an interview West gave on BBC Radio 1 in which he discussed the limitations he's faced as his fame has grown, among many other topics.

West told Kimmel he's often upset with his portrayal in the media but usually keeps his reaction to himself. This time, though, since he knew Kimmel, he felt he had a license to reach out by phone and discuss his disapproval man to man.

"That elevates sometimes," West said. "Jimmy does his thing, I do my thing, and at some point egos can flare up, and we kind of took it back to high school."

Kimmel showed the highlights from West's resulting Twitter rant -- "You should have seen the second set of tweets," West joked -- and admitted he'd just seen a few snippets of the BBC interview before approving the skit and didn't realize how personal it was.

"I really felt bad about all this stuff, I did," Kimmel said after West walked on stage. West responded: "Mmm huh," but smiled widely after watching a portion of the skit.

In a sometimes stream-of-consciousness delivery, West talked passionately about discrimination based on class, protecting his music publishing from covetous drug dealers, false humility and his thoughts on and experience with high fashion. He also ranted against the Hollywood Walk of Fame organization for denying his girlfriend, Kim Kardashian, a star and reflected on his recent negative interactions with paparazzi.

"The way the paparazzi talk to me and my family is disrespectful also, you know what I'm saying?" West said. "We bring something of joy to the world. When people hear my music they have a good time, and I should be respected as such when I walk down the street. Don't ask me a question about something you saw on the tabloids. Don't try to antagonize me, because it's not safe for you in this zoo, you know? Never think that I'm not from Chicago for one second."

Though both denied it was a publicity stunt, they did take advantage of the opportunity. A commercial touting West's concert tour ran during the show and ABC's "Nightline" aired a segment on West in the wake of the appearance. West's appearance went long, pre-empting an appearances by Arctic Monkeys.

Kimmel thanked West for appearing on the show, and West responded: "Thank you for the platform."