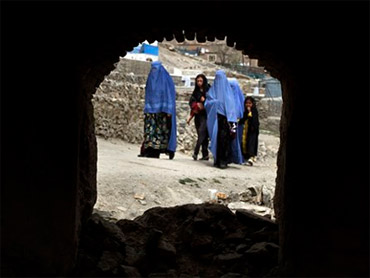 President Hamid Karzai has met with representatives of a major Taliban-linked insurgent group in a step toward national reconciliation, presidential spokesmen said Monday.

Talking with the Taliban and other insurgent groups is gaining traction in Afghanistan, even as thousands of U.S. and NATO reinforcements are streaming in to reverse the insurgents' momentum. NATO reported two more service members were killed Monday in separate explosions in southern Afghanistan but did not release nationalities.

Besides finding ways to reconcile with insurgent leaders, the Afghan government is finalizing a plan to use economic incentives to lure low- and mid-level fighters off the battlefield. Regional countries such as Pakistan, India and Iran have begun staking out positions as the 8-year conflict nears an endgame.

Deputy spokesman Hamed Elmi would not say when the meeting with the delegation from Hizb-i-Islami took place or give any details of what was discussed. A member of the Hizb-i-Islami insurgent movement, led by former Prime Minister Gulbuddin Hekmatyar, said the meeting occurred Monday morning and that further talks were expected.

"I can confirm that a delegation of Hizb-i-Islami has arrived in Kabul with a plan and has met with the president," Elmi said.

The leader of the delegation is Qutbudin Halal, who served as first deputy prime minister under President Burhanuddin Rabbani in the 1990s, and includes a Hekmatyar son-in-law.

Officials of the group, whose fighters operate in the east and north of the country, said the delegation brought a 15-point peace plan, which calls for all foreign troops to leave Afghanistan within six months beginning in July, a full year before President Barack Obama would begin removing U.S. forces.

The plan also calls for the current Afghan parliament to serve through December. After that, the parliament would be replaced by an interim government, or shura, which would hold local and national elections within a year. A new Afghan constitution would be written, merging the current version with ones used earlier.

"Foreign fighters will not stay in Afghanistan after the withdrawal of foreign troops," according to a version sent by e-mail by a Hizb-i-Islami official to The Associated Press.

Karzai's chief spokesman, Waheed Omar, said the delegation had presented its plan but "we have not yet studied it."

"The president will study the concepts, but we're not in a position to comment on the concepts that they provided," Omar said.

Harun Zarghun, chief spokesman for Hizb-i-Islami, said the delegation also hopes to meet with Taliban leaders somewhere in Afghanistan. The U.S. Embassy, however, said there would be no meetings with U.S. officials.

Earlier this month, Hizb-i-Islami militiamen fought the Taliban with rocket-propelled grenades and heavy machine guns in Baghlan province. Dozens of Hizb-i-Islami fighters ended up joining government forces that had amassed on the edge of the battle zone.

Hekmatyar, who is in his 60s, was a major recipient of U.S. military aid during the war against the Soviets in the 1980s but fell out of favor with Washington because of his role in the civil war that followed the Soviet withdrawal. He was considered a close ally of al Qaeda leader Osama bin Laden but offered in 2007 to negotiate with the Karzai government.

Karzai has begun reaching out to insurgents this year and has called for a national congress, or "peace jirga," to be held late next month to lay the groundwork for a peace initiative.

This month, a Karzai adviser and other Afghans involved in the peace process said the government had been holding secret talks with the Taliban's No. 2 when he was captured in Pakistan. Karzai was "very angry" when he heard that the Pakistanis had picked up Mullah Abdul Ghani Baradar with an assist from U.S. intelligence, one adviser said.

The U.N.'s former envoy to Afghanistan, Norwegian diplomat Kai Eide, said last week that he and other U.N. officials had been in discussions with senior Taliban officials since last year, but the arrests of Mullah Baradar and other senior Taliban figures halted the dialogue.

Eide said the Pakistanis surely knew the roles these figures had in efforts to find a political settlement. Pakistan denies the arrests were linked to reconciliation talks.