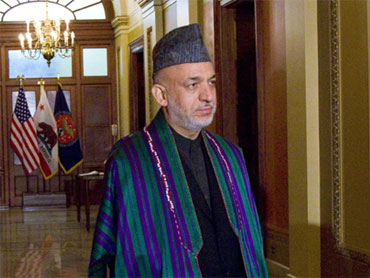 According to his office, Karzai told a visiting U.S. congressional delegation that the July withdrawal date gives the insurgency "morale value."

He has also told the head of U.S. Central Command that terrorism won't be defeated without rooting out terrorist sanctuaries across the border. It's believed that Taliban and other groups recruit fighters and base their leadership in Pakistan.

President Barack Obama's critics say the deadline gives the Taliban motivation to hold out until after next July and then make a new push for power. Obama says the pullout will depend on the security situation.

Karzai's comments come on a day when eight Afghan police were killed in an insurgent attack.

On Tuesday, a top U.S. general also said that winding down its decade-old war in Afghanistan is encouraging to the Taliban.

"In some ways, we think right now it's probably giving our enemy sustenance," said Commandant Gen. James Conway of the 2011 deadline. "We think that he may be saying to himself ... 'Hey, you know, we only have to hold out for so long."'

Conway was referring to intelligence intercepts that suggest that Taliban fighters have been encouraged by the talk of the U.S. beginning to withdraw troops next year.

But, Conway quickly added, the perception that the U.S. is pulling out completely is likely to work in America's favor after the deadline passes, when Marines are still fighting insurgents. Taliban morale is likely to drop when "come the fall we're still there hammering them like we have been," he said.

It will likely be a few years before Afghanistan is secure enough for the U.S. Marines to leave Conway said, adding his voice to a growing chorus of military leaders warning of a long fight ahead.