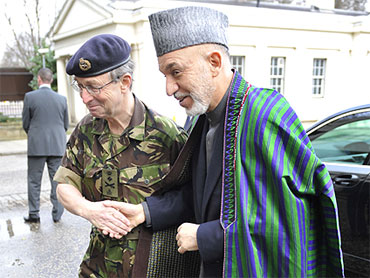 Afghan President Hamid Karzai told a global meeting Thursday that he will soon convene a peace conference in his country to lure Taliban fighters to renounce violence, but he still expects foreign troops to stay for up to a decade.

Karzai called on delegates from about 70 nations and world bodies to support a plan to reintegrate Taliban insurgents into mainstream society with offers of housing and jobs in the police, army or agriculture.

"We must reach out to all our countrymen, especially our disenchanted brothers who are not part of al Qaeda or other terrorist networks," Karzai told the conference aimed at plotting an eventual Western exit from Afghanistan amid rising military casualties and growing public disquiet.

International allies have said they will pledge at least $500 million for the reconciliation fund and Secretary of State Hillary Clinton said the United States would back it if insurgents pledge to eschew violence, renounce ties to al Qaeda and embrace democracy after more than eight years of combat.

Clinton said the "U.S. military has been authorized to use substantial funds to support the effort," but did not say how much the U.S. would give to the money pool - officially known as the trust fund, and dubbed the "Taliban Trust Fund" by some.

Taliban fighters have been taking over wider swathes of the country and successfully attacked the center of Kabul, power base of the feeble central government led by Karzai. Al Qaeda leaders have regrouped near the Pakistan-Afghan border.

The United States and its NATO allies are sending 37,000 more troops in a bid to blunt the Taliban's military momentum but President Barack Obama has said he plans to start withdrawing some U.S. troops by July 2011.

British Prime Minister Gordon Brown opened the one-day talks at a grand Georgian town house in central London by saying they would endorse plans for Afghanistan to increase its military to 171,600 by Oct. 2011, and boost police numbers to 134,000 by the same date.

"By the middle of next year we have to turn the tide," Brown said.

Delegates including U.N. Secretary-General Ban Ki-moon and NATO chief Anders Fogh Rasmussen also hoped to set targets for transferring security control of several provinces to the local police and military by the end of 2010.

Karzai said he envisioned Afghanistan's government taking control of security in all 34 provinces by 2015, but foreign troops could remain for up to a decade.

"With regard to training and equipping the Afghan security forces, five to 10 years will be enough," Karzai said in a joint BBC interview with Brown, broadcast Thursday. "With regard to sustaining them until Afghanistan is financially able to provide for our forces, the time will be extended to 10 to 15 years."

In return for its support, Brown said the world wants to see "action on corruption and better governance" from Karzai, who is tainted by a fraud-marred election victory and a failure to expand his government's power much beyond the capital.

"We have expectations for him," she told The Associated Press. "But we also have high hopes for him."

Unfortunately, there is simply no evidence, in spite of vast U.S. and European pressure, that Karzai is capable of rooting out corruption, irrespective of his intentions, writes CBS News' Elizabeth Palmer and Farhan Bokhari.

The Taliban have dismissed his reconciliation plan, saying in a statement posted to their Web site Wednesday that their fighters wouldn't be swayed by financial incentives.

Karzai said the plan needed particular support from Afghanistan's neighbors - especially Pakistan and Saudi Arabia, which worked together to facilitate the rise of the radical Islamic movement in the 1990s. They, along with the United Arab Emirates, were the only countries to recognize Taliban rule in Afghanistan.

"We hope that his majesty (Saudi) King Adbullah will kindly take a prominent role to guide and assist the peace process," Karzai said.

The Afghan chief said he would convene a peace jirga - or conference - to discuss the proposals and would reach out to low-level Taliban and "our disenchanted brothers who are not part of al Qaeda or other terrorist networks."

The U.N. on Tuesday removed the names of five former Taliban officials - including a former confidant of Taliban leader Mullah Mohammed Omar - from a U.N. sanctions list in support of the reconciliation efforts.

"Some pretty unsavory characters are going to have to be brought within the system," Mark Sedwill, NATO's newly appointed civilian chief - and the ex-British ambassador in Kabul - told a meeting Wednesday.