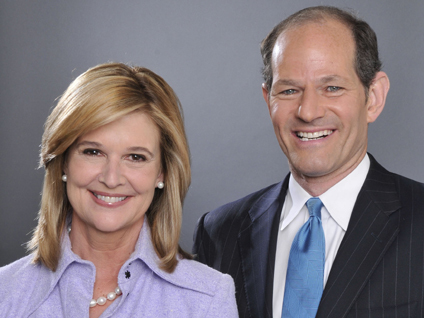 CNN said the decision to cut ties with Parker was mutual.

The show debuted last fall to some tough reviews and poor ratings in a time slot dominated by Fox News Channel's Bill O'Reilly. But the ending of MSNBC's "Countdown" with Keith Olbermann last month has given CNN an opportunity. The network has averaged 638,000 viewers in the time slot during a newsy period this month, up 24 percent from last February's show with Campbell Brown, the Nielsen Co. said.

The new show will be dubbed "In the Arena," with two conservatives -- former Fox News Channel personality E.D. Hill and National Review columnist Will Cain -- joining Spitzer as panelists. CNN said others will be on the show, but they haven't been named yet.

"We have been pleased with how the 8 p.m. hour has become a centerpiece of substantive, policy-oriented conversation, and we are looking forward to building on that with this new format," said Ken Jautz, the executive in charge of CNN's U.S. network, in a memo to his staff Friday.

Parker said that she wanted to concentrate on her writing and that "with the show moving in a new direction, it was time to move on." She'll provide occasional commentary elsewhere on the network, Jautz said.

Spitzer said it had been "a joy" working with Parker. Her last day on the show was Friday.