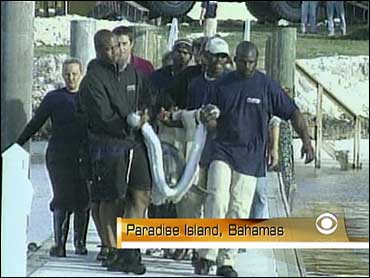 moved
to a resort in the Bahamas.

The dolphins, which had been housed at temporary locations around the country, were transported to Mobile, Ala., and loaded onto an airplane for the final stage of their trip, officials said.

Another dolphin was left behind because she is ill with a fungal infection, said Stacey Coltraine, a former trainer of the dolphins, and will be flown to the Bahamas when she is healthy.

The mammals lived at Marine Life Oceanarium in Gulfport, doing jumps and other tricks in programs for tourists, before it was severely damaged by Katrina on Aug. 29.

Some of the younger dolphins had been moved inland to hotel swimming pools ahead of the storm. Eight others were pulled out to sea during the storm when their Oceanarium tank was destroyed. Biologists located them Sept. 10 by performing aerial surveys, and they were rescued within a few days.

While the dolphins were well cared for at their temporary locations on the Mississippi Gulf Coast, Florida, Baltimore and New Jersey, officials were concerned that cold weather and the effects of separation could soon take a toll.

The dolphins will live in seven interconnected resident pools at Atlantis, a resort on Paradise Island.

The Atlantis team of more than a dozen marine mammal specialists and veterinarians helped with the transfer.

The resort will also take on 24 sea lions and 22 exotic birds from Marine Life.

The dolphins have been at the center of a legal battle between the two owners of Marine Animal Productions, the company that owns the dolphins. One of the two, Dr. Moby Solangi, had opposed moving the dolphins out of the United States.

"This is cowboy country, man. And you try and tell someone to do something and they want to do the opposite," the mayor Sioux Falls said when asked why they don't enforce mask mandates.