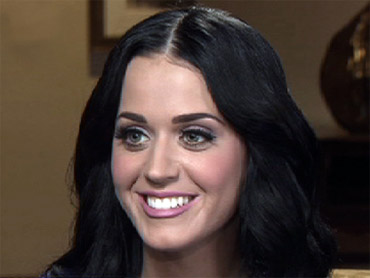 From hit singles to getting hitched, pop superstar Katy Perry is having a banner year.

"Early Show" co-anchor Maggie Rodriguez recently sat down with Perry to chat about her year -- and what to expect next.

Rodriguez told Perry, "What a year, it has been for you. You had the No. 1 song of the summer 'California Gurls.' And then you followed up with another hit 'Teenage Dream.' You get married. You're everywhere. You're a household name. Does life get any better than this?"

Perry said, "I hope so. I mean I don't want to be peaking at 26, I have dreams and they're really, really big."

But it's hard to imagine how this young star's career could get much bigger, Rodriguez said. Her latest album, Teenage Dream, debuted at No. 1 on the charts this summer. Rodriguez added, she dominates the radio waves, pushing the envelope perfectly.

And she constantly makes headlines, especially after marrying British actor-comedian Russell Brand at a top secret ceremony in India last month. She she's even got her own fragrance called Purr.

Speaking of the fragrance, Perry said, "It's got this kitty theme. It's a purrrrfect purrrrfume, that represents my purrrrsonality."

But the year of the kitten isn't over. Tomorrow night, Katy Perry will perform on one of the sexiest catwalks in the world: the Victoria's Secret Fashion Show.

Perry said, "I was so excited to be a part of that amazing show because it's brilliant, the costumes are beautiful,and I just, I was really happy be to be around all those hot girls, of course."

Rodriguez said, "Well, we saw you rehearsing and you fit right in. You looked like you were one of them.

Rodriguez said, "To be strong and empowered is what your latest single is about. I love 'Firework.' ...The music video, I found myself watching it and thinking we can all relate to one character in that video."

"Firework" is Perry's seventh single to top the billboard charts, an impressive feat for a singer who, just two years ago, was known for only one thing: the song, "I Kissed a Girl."

But Perry told Rodriguez she's "OK with that."

Rodriguez asked, "When you think back to your childhood in Santa Barbara, going to church every weekend. Being raised, not being allowed to listen to the songs that you now sing, if I would have told you back then that you were going to be this sexy, pinup pop star, would you have believed me?"

Perry replied, laughing, "I think that was always in the back of my mind that was the plan."

Rodriguez pointed out, despite Perry's banner year, 2010 could get even better for her, as the nominees for music's biggest prize are announced later this week.

Rodriguez asked, "What would a Grammy mean to you?"

Perry said, "Grammys are like catching shooting stars, so hopefully one day I'll catch one."

Perry will appear in the Victoria's Secret Fashion Show on Tuesday night at 10/9 Central on CBS.