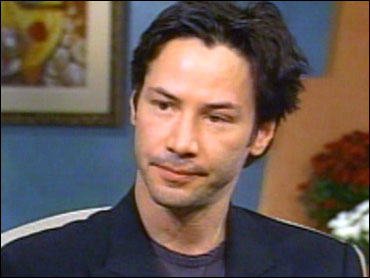 As fans of "The Matrix" know, "Everything that has a beginning has an end."

Audiences around the world saw that end in the final chapter of the sci-fi movie franchise in "The Matrix Revolutions."

In the film, Keanu Reeves returns as Neo, who learns from the Oracle that he must fight Agent Smith to end the war between the humans and machines.

Carrie-Anne Moss, who plays Trinity in the film, was quoted as saying, "There is no one who works harder, no one is harder on themselves than Keanu." Asked why he pushes himself so hard, Reeves says, "This is just really enjoyable and something I love. And it's the best way to be it, I guess."

Now that the "Matrix" franchise has made millions of dollars, Reeves says, "It's fun to be part of a film that people get something from and speak from oftentimes which is what you hope for."

Personally he notes, "It hasn't hurt my career, which means getting a chance to do other projects and to work, and I guess it's the impact of the relationships I have with Carrie-Anne and Laurence Fishburne and I guess the people that I worked with."

Some Facts About Keanu Reeves