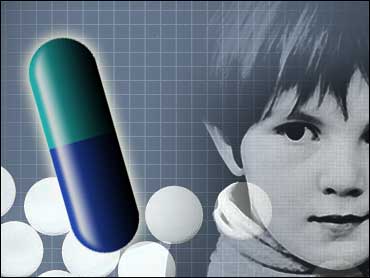 Each year, more than 50,000 children are rushed to emergency rooms after accidentally swallowing medications.

A report from the Centers for Disease Control and Prevention suggests that number could drop dramatically if parents followed a few basic safety rules.

tells
co-anchor Rene Syler that the number is actually over 50,000, since it doesn't include kids seen in other settings, such as their private physicians' offices.

The youngsters in the report didn't die, Senay says, they only became ill. This isn't the total number of problems out there and probably a lot of kids go unrecognized.

Senay explains that the kids are drawn to the medications by curiosity and opportunity.

The study, she says, looked at kids 4 and younger but also found that, "Even in the ages of 1 to 2, kids can reach up and grab something off the table. They can go into a waste basket, they can rifle through your purse. Kids even in this young age group can get their hands on this stuff.

"And this stuff is often very attractive. It's brightly colored. They've probably had it before. It probably tastes good if it's a child's medication, or they think it looks like candy. So the opportunity is there in many cases, and kids will get to it if it's there."

What's more, it's not only prescription medications that present the risk.

"It's vitamins, supplements and also," Senay notes, "40 percent of the time or even more than that, things that we think of as so common that they are benign, like acetaminophen or a cough suppressant" are involved.

"In high doses," Senay continues, "this can be dangerous for children."

But there are things you can do in the ounce-of-prevention-department, Senay advises.

For starters, put your medications in a secured cabinet.

"A lot of people might have Grandma visiting or someone visiting and they leave their medications around," she says. "You might want to think of everybody putting their medications in a medicine cabinet that can even be locked. Child-resistant caps aren't foolproof. So you have to put the medications up where kids can't get to them."

"Flush it down the toilet," Senay says. "Don't put it in the garbage, because kids will find it."

Another suggestion: Don't take your medicine in front of your kids because they try to emulate you. And don't call it candy. Kids are going to do whatever you do. Very often, even adult pills are brightly colored and look like candy. That will give the child the idea it's OK to take it.