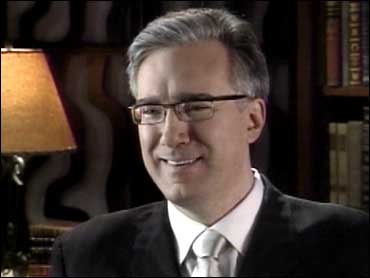 MSNBC's Keith Olbermann will return to the air on Tuesday after being suspended without pay last Friday for making three unapproved political contributions.

"After several days of deliberation and discussion, I have determined that suspending Keith through and including Monday night's program is an appropriate punishment for his violation of our policy," said MSNBC president Phil Griffin in a statement on Sunday night. "We look forward to having him back on the air Tuesday night."

Politico reported last week that Olbermann, the host of MSNBC's "Countdown with Keith Olbermann," had made contributions to Democratic candidates Jack Conway, Rep. Raul Grijalva and Rep. Gabrielle Giffords in the weeks leading up to November's midterm elections.

MSNBC policy states that employees are prohibited from making political contributions without getting them pre-approved by the network.

In a statement last week, Olbermann said that, despite the three contributions, he "did not privately or publicly encourage anyone to donate to these campaigns nor to any others in this election or any previous ones, nor have I previously donated to any political campaign at any level."

The liberal talk show host's brief suspension angered progressive activists, spurring the group Progressive Change Campaign Committee to start an online petition to reinstate Olbermann, which garnered more than 300,000 signatures. Lieutenant Dan Choi, an advocate for gay rights who often appears on MSNBC, said on Twitter he would decline interviews on the network until Olbermann was back on the air.

The episode also raised questions about the ethics behind campaign giving by political commentators.

On her eponymous MSNBC show on Friday, Rachel Maddow pointed out that Olbermann's contributions were hardly an anomaly in the political talk show world - particularly when compared with the number of contributions that come from Fox News, which has no policy barring its employees from donating.

"Let this incident lay to rest forever the facile, never-true-anyway, bullpucky, lazy conflation of Fox News and what the rest of us do for a living," Maddow said. "Yes, Keith's a liberal, and so am I, and there are other people on this network whose political views are shared openly with you, our beloved viewers. But we are not a political operation. Fox is. We are a news operation. And the rules around here are part of how you know that."