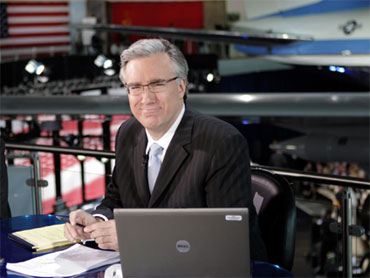 MSNBC has suspended prime-time host Keith Olbermann indefinitely without pay for contributing to the campaigns of three Democratic candidates this election season.

Olbermann acknowledged to NBC that he donated $2,400 apiece to the campaigns of Kentucky Senate candidate Jack Conway and Arizona Reps. Raul Grivalva and Gabrielle Giffords.

NBC News prohibits its employees from working on, or donating to, political campaigns unless a special exception is granted by the news division president - effectively a ban. Olbermann's bosses did not find out about the donations until after they were made. The website Politico first reported the donations.

His "Countdown" show, which airs at 8 p.m. ET, is MSNBC's most popular program. His on-the-air transformation from the host of a straight news program to a liberal commentator led the network itself to go in the same direction, filling its prime-time lineup with left-leaning hosts and doing better in the ratings than anytime since its 1996 launch.

The rise in opinionated cable news programming has called into question whether the traditional rules of news organizations to preserve the appearance of impartiality should apply to people who have their jobs in part because of a clear point of view.

Sean Hannity, a conservative radio talk show host with a popular hour on Fox News Channel each weeknight, donated $2,400 to the congressional campaign of New York Republican John Gomez in May. In August, he donated $5,000 to Michelepac, or Many Individual Conservatives Helping Elect Leaders Everywhere, according to the Federal Election Commission. The PAC is associated with Minnesota Republican Rep. Michele Bachmann.

Fox's Bill Shine, senior vice president of programming, told the Twin Cities Pioneer Press after the Bachmann donation that "it's always good to remember that he's not a journalist; he's a conservative TV host. If he wants to donate to a candidate, he certainly can."

MSNBC's own Joe Scarborough, who hosts the "Morning Joe" program, is listed in campaign records as donating $4,200 in 2006 to Derrick Kitts, a failed Republican congressional candidate.

Grijalva was on Olbermann's show twice in the weeks leading up to the election, once on Oct. 22 because the congressman's office in Tucson had received a suspicious envelope containing powder in the mail, and on Oct. 28 to talk about the state's tough new immigration law, spokesman Adam Sarvana said. Grijalva did not ask for a donation and Olbermann did not say he was giving one.

"I assume that Olbermann decides on his own who to give his money to," said Sarvana, adding that the campaign was surprised when the check arrived.

A spokeswoman for Giffords also said Olbermann's donation was unsolicited. Her race against a Republican tea party candidate was still too close to call on Friday afternoon.

Olbermann was a co-anchor of MSNBC's election coverage this week. The network's performance drew some criticism, particularly with Chris Matthews' contentious interviews with Republican Bachmann and Marsha Blackburn.

Olbermann was seen laughing following Matthews' conversation with Bachmann. Matthews had criticized the congresswoman for failing to answer his questions.

"Are you hypnotized tonight?" Matthews said. "Has someone hypnotized you? Because no matter what I ask you, you give the same answer."

"You can't defeat Fox by becoming what they say you are," Stewart said. "The only way you can defeat them is by an earned credibility, not an earned partisanship. They're making a mistake by becoming an equivalent to Fox rather than a brand new journalistic organization."

There has been discomfort in the past at NBC News over the roles of Matthews and Olbermann on newsy nights. For part of the 2008 campaign, the two men anchored MSNBC's prime-time political coverage, but when the general election campaign started, they were replaced by David Gregory and given the role of commentators.

Olbermann, 51, has a volatile work history, feuding with management at ESPN, where he came to prominence as a "Sportscenter" host. He had a different prime-time show for MSNBC in the late 1990s, but said he quit because he was angry that management compelled him to spend a lot of time on the scandal that led to President Clinton's impeachment.

Because Olbermann is a polarizing figure, his suspension set different sides of the political spectrum aflame. Brent Bozell of the conservative Media Research Center called Olbermann "the worse hypocrite in the world" for complaining about News Corp's political donations while making similar ones himself, while the liberal Progressive Change Campaign Committee started an online petition demanding that MSNBC put Olbermann back on the air.

"Is this simply a personality conflict within MSNBC or is one of America's major corporations cracking down on a viewpoint they may not like?" asked Sen. Bernie Sanders, a Vermont independent. "Whatever the answer may be, Keith Olbermann should be reinstated immediately and allowed to present his point of view."

After initially saying Chris Hayes would fill in for Olbermann on Friday, MSNBC changed its mind but wouldn't immediately say who would do it.

Hayes later tweeted it was his decision to decline filling in for Olbermann on "Countdown" tonight.