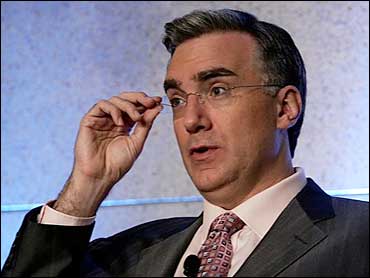 Keith Olbermann has been suspended indefinitely without pay from MSNBC for making donations to three Democrats in violation of NBC's ethics policy.

"I became aware of Keith's political contributions late last night," Phil Griffin, President of MSNBC, said in a statement. "Mindful of NBC News policy and standards, I have suspended him indefinitely without pay."

Olbermann, who does not hide his liberal views, has acknowledged donations of $2,400 each to Kentucky Senate candidate Jack Conway and Arizona Reps. Raul Grijalva and Gabrielle Giffords during this election cycle.

NBC's ethics policy generally bars political activity, including contributions, without the approval of the president of NBC News, Steve Capus, according to a 2007 story on MSNBC.com.

"Anyone working for NBC News who takes part in civic or other outside activities may find that these activities jeopardize his or her standing as an impartial journalist because they may create the appearance of a conflict of interest," it says. "Such activities may include participation in or contributions to political campaigns or groups that espouse controversial positions. You should report any such potential conflicts in advance to, and obtain prior approval of, the President of NBC News or his designee."

In a statement to Politico, which first reported the donations, that was released before the suspension was announced, Olbermann said: "I did not privately or publicly encourage anyone else to donate to these campaigns, nor to any others in this election or any previous ones, nor have I previously donated to any political campaign at any level."

The candidates Olbermann donated to had mixed results. Conway lost his race to Tea Party-backed Republican Rand Paul, but both Grijalva and Giffords lead in tight races that CBS News has not yet projected. All three appeared on Olbermann's show, and Grijalva has appeared multiple times.

As Politico notes, Olbermann and MSNBC President Phil Griffin have been critical of Fox News over its two $1 million donations to Republicanand Republican-leaninggroups during the midterm election cycle.

MSNBC has cast itself as a liberal alternative to the conservative Fox News channel, a move that has helped the network improve its ratings, though not to the level of Fox News.

Liberal media watchdog Media Matters claims that "During the 2009-2010 election cycle, more than 30 Fox News personalities have endorsed, raised money, or campaigned for Republican candidates or organizations in more than 600 instances."

Many of these personalities are contributors like Karl Rove and Sarah Palin, not hosts, however, and not all of them gave money to candidates. Asked for a situation comparable to Olbermann, Media Matters pointed to Fox News hosts Sean Hannity and MIke Huckabee, among others. Hannity donated $5,000 to Rep. Michele Bachmann's political action committee and pledged donations to other candidates, and Huckabee's political action committee has given to a variety of candidates.

"Personal involvement in political activity is permitted as long as the activity does not interfere with or impair the performance of the employee's duties for the Company," says the company's 2007 ethics policy.