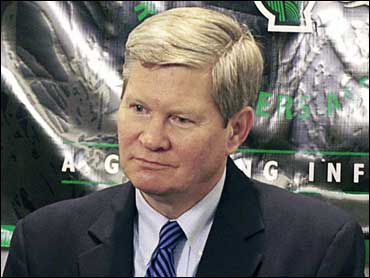 President Barack Obama's plan to recast how the government regulates Wall Street could be thrown a curve this fall if Sen. Tim Johnson, a Democrat whose home state is a major hub for credit card companies, takes over the chairmanship of the Senate's banking committee.

With the potential shake-up in limbo after the death of Sen. Edward Kennedy, the focus as Congress returns next week from its August break will be on whether Sen. Christopher Dodd, D-Conn., will give up his perch atop the banking panel to become chairman of one of the two committees responsible for overhauling that nation's health care practices.

If Dodd chooses to succeed his friend, Kennedy, as head of the Senate Health, Education, Labor and Pensions Committee, he would have to relinquish command of the banking panel and forgo control of imposing new laws on a financial industry blamed for plunging the nation into the worst economic crisis since the 1930s.

Another option could be for Democrats to leave the health committee chairmanship vacant for several weeks, or enough time for Dodd to finish the financial overhaul package.

Democratic leaders have confirmed that Johnson, a South Dakota Democrat, would be offered the chairmanship of the Banking, Housing and Urban Affairs Committee if Dodd steps down. Sen. Chuck Schumer, D-N.Y., told reporters Thursday that Johnson would be a capable and independent chairman.

Capitol Hill aides said the decision is up to Dodd, who declined to comment. His aides said they have no timetable on when he might make a decision.

Dodd faces a tough re-election fight next year after being embroiled in a sweetheart loan scandal and legislation that allowed bailed-out insurance giant AIG to pay out millions of dollars in employee bonuses.

Dodd has relied on his position as banking committee chairman to push through tough new protections for consumers, including a new law that tightens rules on how credit card companies do business. Dodd also has been drafting a separate bill that would create a new government agency dedicated solely to protecting financial consumers from fraud and abusive business practices.

Johnson voted against Dodd's credit card bill, saying it could "limit access to credit for consumers and potentially jeopardize thousands of jobs in South Dakota." He also has questioned Obama's desire to put new restrictions on banks that offer exotic financing instruments, which contributed to last year's financial meltdown.

"Your proposal seems to create many hurdles for both banks that offer these types of products and consumers that use them," Johnson told an administration official at a July hearing.

Because of its lender-friendly credit card laws, Johnson's home state of South Dakota has become an operational hub for major credit card issuers such as Citigroup Inc. and United National Corp.'s Premier Bankcard.

Complicating matters for Democrats is that Johnson is still recovering from a 2006 brain hemorrhage. He speaks slowly and softly and relies on a powered chair to maneuver the Capitol, leaving some aides and lobbyists to question whether he could physically handle the demanding job of managing a financial regulatory overhaul.

Spokeswoman Julianne Fisher declined to comment on Johnson's potential promotion but said his health has not kept him from being an effective senator.

Jim Manley, a spokesman for Senate Majority Leader Harry Reid, D-Nev., said Johnson would be offered the banking committee chairmanship if Dodd steps down. Manley said Johnson's health was not a factor.

Regardless of any potential shake-up in committee chairmanships, the Senate still plans to consider a financial overhaul bill this fall, Manley said.

Although Dodd has championed much of Obama's plan, including creation of the financial consumer protection agency, he has diverged from the president in other areas.

Dodd has advocated stripping the Federal Reserve of its supervisory powers and creating a new consolidated bank regulator. He also has considered creating a council of regulators to monitor risk across the financial system and regulate firms deemed too big to fail, instead of handing that job to the Fed.

Johnson has said he supports Obama's proposal to give regulators the ability to dismantle large interconnected companies.

"It's my view that we would be much better advised if we simply dismantled gigantic, troubled firms instead of bailing them out," he wrote in a June opinion piece in the American Banker, a trade publication.