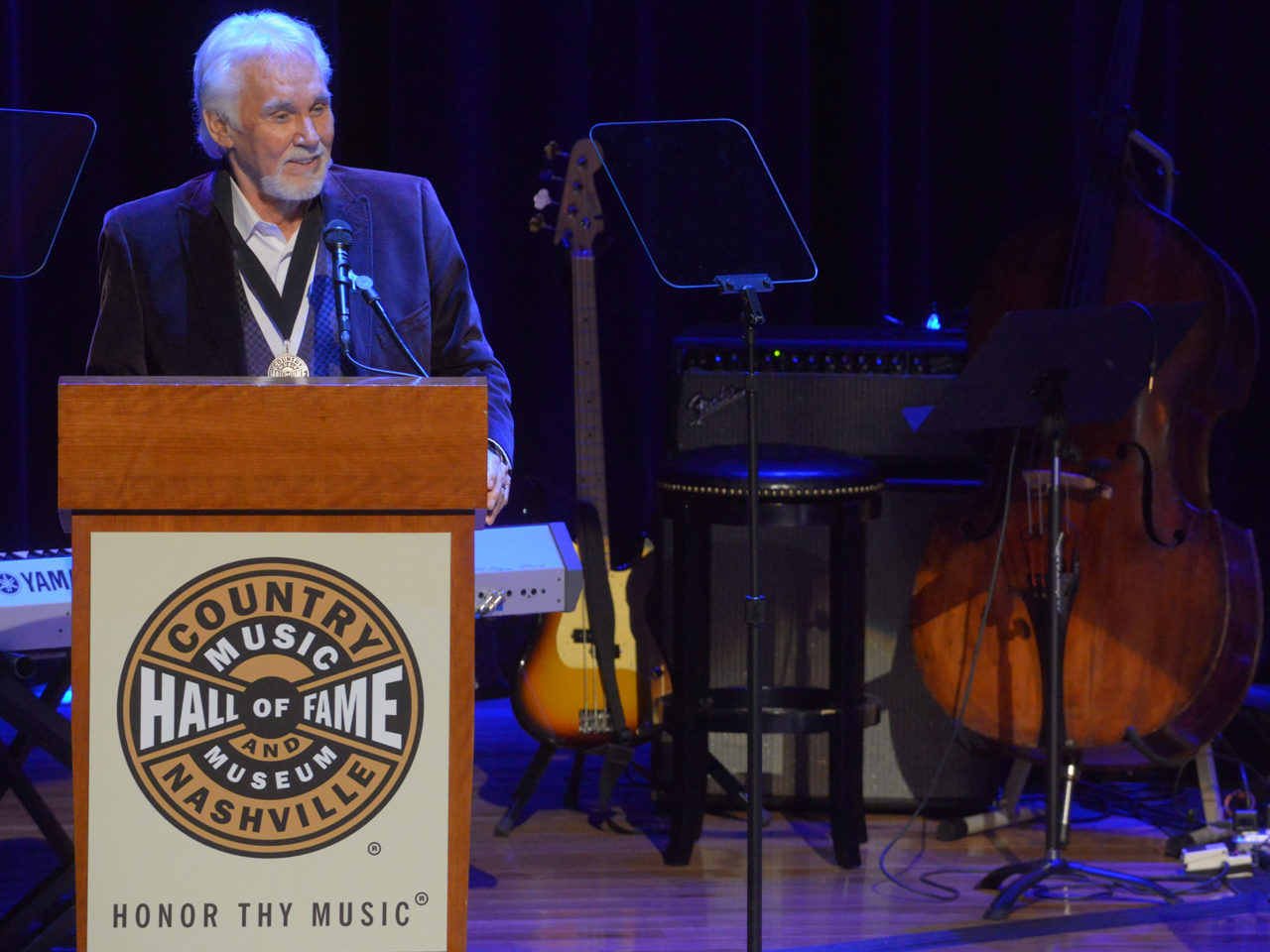 Kenny Rogers, Bobby Bare and the late "Cowboy" Jack Clement -- three men whose influence still ripples across the surface of modern music -- are now members of the Country Music Hall of Fame.

The three were saluted by stars Garth Brooks, Kris Kristofferson, Emmylou Harris, Barry Gibb, John Prine and others during a ceremony Sunday at the newly expanded Country Music Hall of Fame and Museum in Nashville.

Each of the three inductees had a profound effect on music in his own way, and one could argue each deserved a place among the genre's greatest names long ago.

"I'm flattered, I'm honored and I'm nervous," Rogers said before the ceremony. "I mean I didn't know that I would be. Very few things make me nervous. But I've never done this before, so it's pretty exciting. What I've realized is that success is not a happening, it's a journey. So as I run back through my history and look at all the things that happened to me and how I got to where I am, this is like the culmination of my career because I've done pretty much everything else. And I think without this it would have been incomplete."

Rogers helped push country music farther into pop music territory than it had ever been. He could go deep country with songs like "The Gambler," ''Ruby, Don't Take Your Love to Town" and "Lucille," but he also had crossover pop hits like "Islands in the Stream" and "Lady," foreshadowing today's more pop-friendly country sounds.

Rogers remains a popular figure in the country music world. Alison Krauss said of his induction, "Justice has been done," and Garth Brooks gives him credit for taking him on the road on his first major tour as an opening act: "If there was an entertainer university, when it comes to Entertainer 101, I can vouch firsthand that Kenny Rogers would be the professor of that class."

Darius Rucker recalled a lifetime of being a fan of the 75-year-old Rogers before singing "Lucille."

Bare scored dozens of hits like "Dee-troit City" and "How I Got to Memphis," mining the work of left-of-center Nashville songwriters like Tom T. Hall, Kris Kristofferson and Shel Silverstein. Though he was never really part of the so-called outlaw movement in country music, he was close friends with many artists who were and his insistence on controlling his own musical choices was an inspiration for others like Waylon Jennings and Willie Nelson.

"He has been responsible for a lot of things that have happened in the country music business," singer John Anderson said. "I remember one day I was talking to my old friend Waylon, and I asked Waylon, 'Man, what caused you to pack up and move to Nashville?' He said, 'Hoss, Bobby Bare had a whole lot to do with it.'"

Known also for his sense of humor, the 78-year-old Bare answered characteristically when asked what being inducted means: "It means that I will forever be referred to as a hall of famer. It sounds real good."

Clement's resume as producer, songwriter, performer, inspiration, raconteur and bon vivant is too lengthy to list, but he veered all across popular music over the last half century. He was Sam Phillips' first producer-engineer at Sun Records in Memphis. He wrote some of Johnny Cash's early hits, putting those unforgettable mariachi horns on "Ring of Fire," and was a repeated touchstone for The Man in Black.

He helped Jerry Lee Lewis shape his proto-rock approach and was at the soundboard for the recording of "Whole Lotta Shakin' Goin' On." Also among his many career highlights was the discovery of Charley Pride and their 13-album association.

Clement found out in February that he would be inducted into the hall of fame, about five months before he passed away in August from liver cancer at 82.

"We do have a message from Cowboy," hall of fame director and CEO Kyle Young said. "He says, 'By all means, relax.'"

Two trumpeters then walked on stage and played the horn intro to "Ring of Fire."