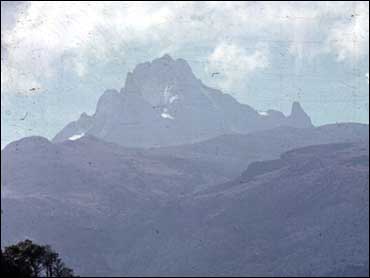 A team of Kenyan investigators began sifting through the wreckage Monday of a chartered plane that slammed into Mount Kenya, killing three generations of an American family and two South African pilots, officials said.

The twin-engine Fairchild turboprop was carrying the 12 U.S. tourists to a game reserve when it hit Point Lenana, third-highest peak of Africa's second-highest mountain, as a cloudy sky was beginning to clear before sunset Saturday, said Bongo Woodley, senior Kenya Wildlife Service warden in charge of Mount Kenya National Park.

Five other grandchildren — two in Atlanta and three who stayed in Johannesburg, South Africa — are left orphaned, reported the Atlanta Journal-Constitution.

The 21-member team of police investigators and Kenyan Wildlife Services recovery workers reached the site Monday and began examining wreckage that was scattered over a large area at around 16,000 feet, said Kubai Severino, a police official. The cause of the crash was still not known.

An effort to bring the remains of those killed down from the crash site was temporarily suspended early Monday because deteriorating weather on the mountain kept helicopters from landing, Severino said.

But authorities expected the skies to clear later in the day and the recovery effort to resume, he said.

In Atlanta, the Rev. P.C. Enniss Jr. at Trinity Presbyterian Church, where many of the victims worshipped, said he had spent much of the day Sunday with their relatives.

"They're just in total shock, as everyone in the church family is," Enniss said. "These people were the heart of Trinity Presbyterian Church as much as anybody else. They were involved in every mission, every governing decision, everything.

The Journal-Constitution reported that George Brumley III and his family lived in Chapel Hill, North Carolina. The family of William and Beth Love had homes in Atlanta and London, the paper said.

The Morrells had left their two younger daughters at home in Atlanta.

Dr. Brumley was chairman of the pediatric department at Emory University before he retired. Two years ago, he joined a group of about a dozen Atlantans who went to Tanzania to climb Mount Kilimanjaro.

Brumley began planning the safari for a dozen relatives while climbing Mount Kilimanjaro two years ago. He felt he had to share Africa's beauty with his family.

Friends of the Brumley family said their absence will be felt throughout Atlanta.

"In every community there are families that set a standard in terms of their civic support and their spirit of generosity," said Neil Williams, chairman of the board of the Woodruff Arts Center. He said he has known Brumley and his wife since they were students at Duke University in the mid-1950s.

This family "typifies that for me. They did what they did with the most remarkable selflessness. Not looking for big credit, just wanting things to be better."

Allison Vulgamore, president of the Atlanta Symphony Orchestra, said Jean Brumley, "wasn't sure about the safari, doing the outdoor thing. But she was going for the family."

Brumley established a foundation that invested in a neighborhood southeast of Atlanta, starting the Whitefoord Community Program to address health issues and ensure children's success at school. Jean Brumley, a board member of the Atlanta Symphony Orchestra, was helping to raise money for a new concert hall.

In Kenya, civil aviation official Peter Wakahia said the aircraft had been "completely destroyed," and debris was scattered on two rock outcrops on either side of the point of impact.

About two hours later, the plane took off for Buffalo Springs National Reserve, where it was expected to leave the passengers at an airstrip, officials said. Buffalo Springs is 135 miles north of Nairobi.

The aircraft had been expected back at Wilson at 6 p.m. Saturday, Gaines-Burrill said.

It wasn't clear where the Americans were to go after getting off at Buffalo Springs. In addition to public lodges and tented camps in the highlands area of spectacular rolling hills and mountains, there are a number of exclusive private game ranches in the region, which also encompasses the Samburu and Shaba national reserves.