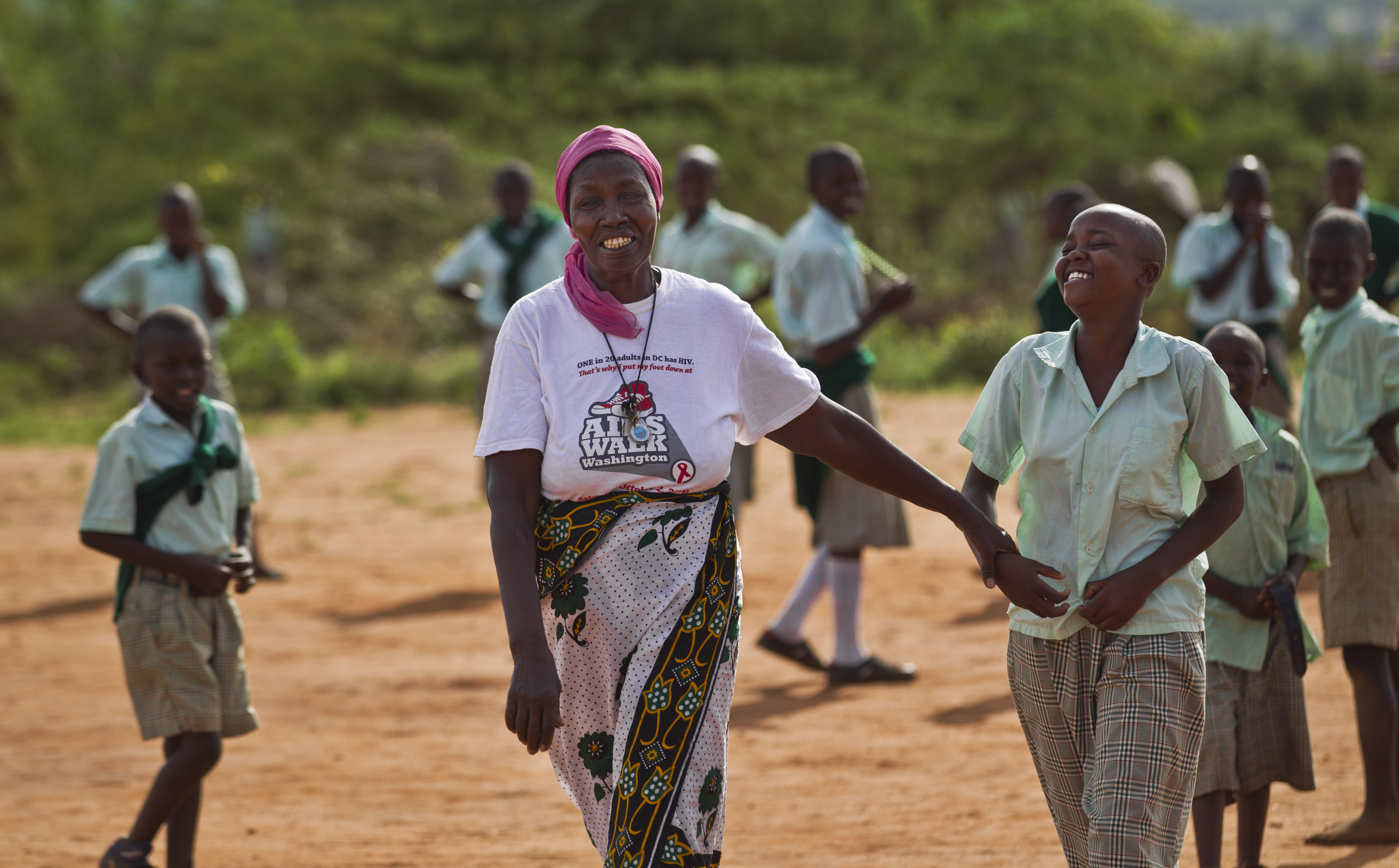 NYUMBANI, KenyaThere are no middle-aged people in Nyumbani. They all died years ago, before this village of hope in Kenya began. Only the young and old live here.

Nyumbani was born of the AIDS crisis. The 938 children here all saw their parents die. The 97 grandparents - eight grandfathers among them - saw their middle-aged children die. But put together, the bookend generations take care of one another.

Saturday is World AIDS Day, but the executive director of the aid group Nyumbani, which oversees the village of the same name, hates the name which is given to the day because for her the word AIDS is so freighted with doom and death. These days, it doesn't necessarily mean a death sentence. Millions live with the virus with the help of anti-retroviral drugs, or ARVs. And the village she runs is an example of that.

"AIDS is not a word that we should be using. At the beginning when we came up against HIV, it was a terminal disease and people were presenting at the last phase, which we call AIDS," said Sister Mary Owens. "There is no known limit to the lifespan now so that word AIDS should not be used. So I hate World AIDS Day, follow? Because we have moved beyond talking about AIDS, the terminal stage. None of our children are in the terminal stage."

In the village, each grandparent is charged with caring for about a dozen "grandchildren," one or two of whom will be biological family. That responsibility has been a life-changer for Janet Kitheka, who lost one daughter to AIDS in 2003. Another daughter died from cancer in 2004. A son died in a tree-cutting accident in 2006 and the 63-year-old lost two grandchildren in 2007, including one from AIDS.

"When I came here I was released from the grief because I am always busy instead of thinking about the dead," said Kitheka. "Now I am thinking about building a new house with 12 children. They are orphans. I said to myself, `Think about the living ones now.' I'm very happy because of the children."

As she walks around Nyumbani, which is three hours' drive east of Nairobi, 73-year-old Sister Mary is greeted like a rock star by little girls in matching colorful school uniforms. Children run and play, and sleep in bunk beds inside mud-brick homes. High schoolers study carpentry or tailoring. But before 2006, this village did not exist, not until a Catholic charity petitioned the Kenyan government for land on which to house orphans.

Everyone here has been touched by HIV or AIDS. But only 80 children have HIV and thanks to anti-retroviral drugs, none of them has AIDS.

"They can dream their dreams and live a long life," Owens said.

Nyumbani relies heavily on U.S. funds but it is aiming to be self-sustaining.

The kids' bunk beds are made in the technical school's shop. A small aquaponics project is trying to grow edible fish. The mud bricks are made on site. Each grandparent has a plot of land for farming.

The biggest chunk of aid comes from the United States President's Emergency Plan for AIDS Relief (PEPFAR), which has given the village $2.5 million since 2006. A British couple gives $50,000 a year. A tree-growing project in the village begun by an American, John Noel, now stands six years from its first harvest. Some 120,000 trees have already been planted and thousands more were being planted last week.

"My wife and I got married as teenagers and started out being very poor. Lived in a trailer. And we found out what it was like to be in a situation where you can't support yourself," he said. "As an entrepreneur I looked to my enterprise skills to see what we could do to sustain the village forever, because we are in our 60s and we wanted to make sure that the thousand babies and children, all the little ones, were taken care of."

He hopes that after a decade the timber profits from the trees will make the village totally self-sustaining.

But while the future is looking brighter, the losses the orphans' suffered can resurface, particularly when class lessons are about family or medicine, said Winnie Joseph, the deputy headmaster at the village's elementary school. Kitheka says she tries to teach the kids how to love one another and how to cook and clean. But older kids sometimes will threaten to hit her after accusing her of favoring her biological grandchildren, she said.

For the most part, though, the children in Nyumbani appear to know how lucky they are, having landed in a village where they are cared for. An estimated 23.5 million people in sub-Saharan Africa have HIV as of 2011, representing 69 percent of the global HIV population, according to UNAIDS. Eastern and southern Africa are the hardest-hit regions. Millions of people - many of them parents - have died.

Kitheka noted that children just outside the village frequently go to bed hungry. And ARVs are harder to come by outside the village. The World Health Organization says about 61 percent of Kenyans with HIV are covered by ARVs across the country.

Paul Lgina, 14, contrasted the difference between life in Nyumbani, which in Swahili means simply "home," and his earlier life.

"In the village I get support. At my mother's home I did not have enough food, and I had to go to the river to fetch water," said Lina, who, like all the children in the village, has neither a mother or a father.

When Sister Mary first began caring for AIDS orphans in the early 1990s, she said her group was often told not to bother.

"At the beginning nobody knew what to do with them. In 1992 we were told these children are going to die anyway," she said. "But that wasn't our spirit. Today, kids we were told would die have graduated from high school."