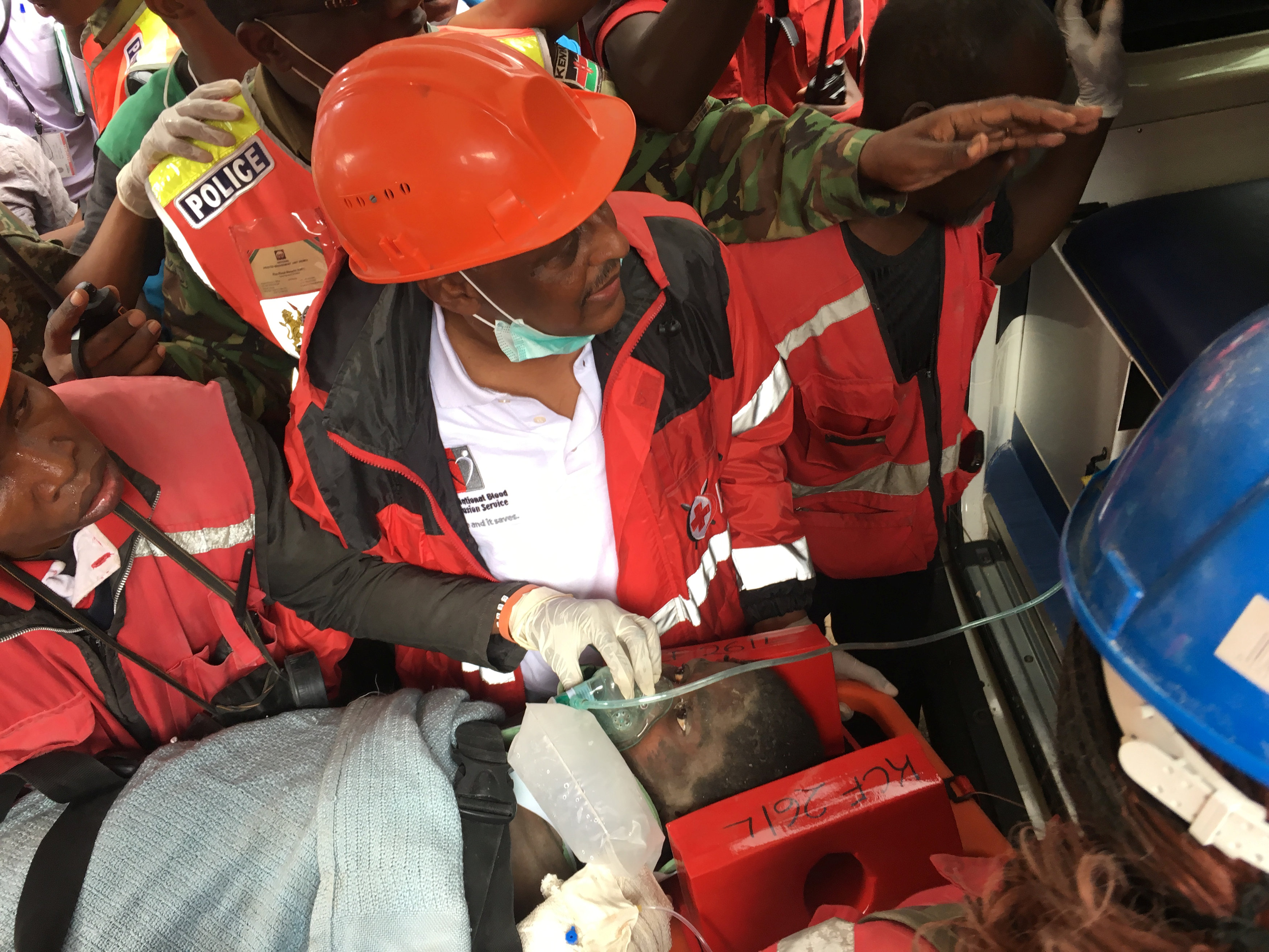 NAIROBI, Kenya -- Rescuers found four more survivors Thursday in the rubble of an apartment building that collapsed six days ago amid heavy rains in the Kenyan capital, raising hopes that more people might still be alive in a disaster that left 36 dead and dozens missing.

One of those rescued was a pregnant woman, although her husband said that amid the joy of finding her alive, doctors also told him that their baby had not survived.

Soldiers, firefighters and volunteers have been working around the clock since the April 29 collapse of the seven-story building in a desperate search, and their spirits were lifted first on Tuesday when a nearly 6-month-old girl was found relatively unscathed in a wash basin.

Then on Thursday, they pulled three women and a man from the debris, said Police Chief Japheth Koome.

A crowd broke into applause as Odhiambo - under a blanket and with her face covered with an oxygen mask - was carried on a stretcher to an ambulance in a scene broadcast live on Kenyan TV.

After she was brought to the hospital, Odhiambo underwent an emergency cesarean section, and doctors told Onyango the baby had died in the womb.

Despite the loss of their child, Onyango told The Associated Press that he was joyful his wife was still alive.

"I cannot say the happiness I have," the truck driver said in a telephone interview. "I have never had such happiness like this in my life."

He said he was able to speak with his wife after the surgery to comfort her.

Nairobi Gov. Evans Kidero tweeted his joy over the rescue, with pictures from the dramatic scene.

Before military engineers broke through slabs of concrete that had trapped Odhiambo in a corner of the building, medics had managed to give her oxygen and an intravenous drip of water and glucose, according to Kenya's Disaster Management Unit.

At least 70 people remain missing, said Kenya Red Cross head Abbas Gullet, and rescuers were working around the clock to find any other survivors. Authorities initially used backhoes in the search, with firefighters and volunteers also removing chunks of debris by hand in the frantic rescue effort. A day after the collapse, the military brought in special equipment. President Uhuru Kenyatta visited the scene.

Trained dogs were brought in, along with special equipment to detect breathing and movement, said military spokesman Col. David Obonyo.

Authorities say it is rare for anyone to survive more than 72 hours without water in such instances.

Following the 2013 collapse of the eight-story Rana Plaza factory in Bangladesh, a 19-year-old woman was rescued after being trapped in the rubble for 17 days, surviving on four packets of cookies and some water. It was the worst garment-industry disaster in history, killing 1,127 people.

In Haiti's 2010 earthquake, a 17-year-old girl was found severely dehydrated and near death in a collapsed home 15 days after the quake struck. Rescuers said she may have had access to water from a bathroom.

A neighbor said the collapsed building had been constructed rapidly and poorly, and its more than 125 single rooms were snapped up quickly at a rent of $35 per month.

It was built less than 15 feet from a river, when it should have been six times that distance, said local lawmaker Steven Kariuki. The National Construction Authority said it had marked the building as unfit for habitation, but the county government failed to follow up.

The building's two owners were taken into custody but released on $5,000 bail Wednesday, pending formal charges.

Most of Nairobi's 4 million people live in low-income areas or slums. Housing is in high demand, and unscrupulous developers often bypass regulations.

After eight buildings collapsed and killed 15 people in the country last year, Kenyatta ordered an audit of all the country's buildings to see if they are up to code. The National Construction Authority found that 58 percent of buildings in Nairobi are unfit for habitation.