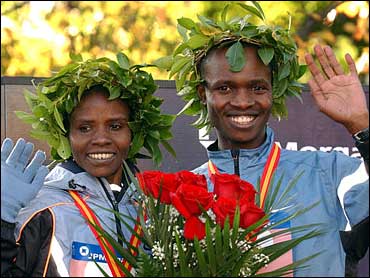 Joyce Chepchumba of Kenya pulled away with a fierce charge to win the women's title in an unofficial 2 hours, 25 minutes, 55 seconds, in temperatures in the 40s and no wind.

"This time was my time," said Chepchumba, whose previous best finish in New York was third in 1996.

Los Angeles Marathon champion Lyubov Denisova of Russia was next among the women, just 22 seconds behind her, and Olivera Jevtic of Yugoslavia came in third despite taking a tumble.

Runyan, the first legally blind Olympian, came in fifth among the women in her first marathon.

The 33-year-old Californian has a degenerative eye condition known as Stargardt's disease that limits her sight to about 15 feet in every direction. During the 2000 Olympics in Sydney, she finished eighth in the 1,500. In Sunday's marathon, she finished just ahead of defending women's champion Margaret Okayo of Kenya.

For the first time, the top women started about 30 minutes ahead of the men. The idea was to give the women a chance at the spotlight, and also to allow them to run without having to navigate crowded roads.

Still, there was some bumping. About 10 miles in, European champion Maria Guida of Italy crossed in front of Runyan and both slightly stumbled, though neither fell. More significantly, Jevtic and Kerryn McCann of Australia got their feet tangled at the 21st mile and both fell. The commotion allowed Chepchumba and Denisova to break away.

The two remained stride-for-stride into the 24th mile. That's when the Kenyan made her move, throwing off her black wool gloves and pulling comfortably ahead just before the runners entered Central Park.

Rop is just the fourth man to win at Boston and New York in the same year.

He made his first serious move on the downhill stretch just after the leaders crossed the East River into Manhattan about two-thirds of the way through. He remained clearly in control over the final 5½ miles.