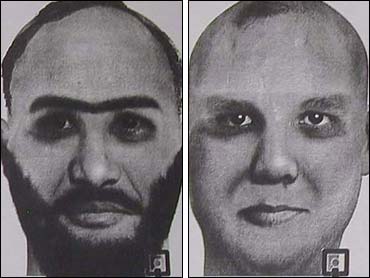 Police on Monday released computer-generated images of two men believed to have taken part in the Nov. 28 attacks on two Israeli targets in Kenya.

The images of the unidentified men — one bearded with a receding hairline, the other with a clean-shaven face and head — are based on information from witnesses, said Deputy Commissioner of Police William Langat. He said Kenyan police believed the men are in their 30s.

The men were described as "Arab-looking" by witnesses, Langat said. But many Kenyans living on the country's Indian Ocean coast are of Arab descent, and the suspects could be Kenyans or foreigners, he said.

Langat refused to say which of the attacks — the suicide car-bombing of a hotel or the firing missiles at an airliner — the men are thought to have taken part in, saying only that "they were seen at one of the two locations around the time of the attacks."

Police do not know whether the men are still in Kenya but are "seeking support of the public in finding the men," Langat said.

On Nov. 28, unidentified assailants fired two missiles at a Boeing 757 Arkia Airlines charter as it was taking off from Mombasa airport with Israeli tourists returning to Tel Aviv.

Shortly afterward, a vehicle loaded with explosives plowed into the Paradise Hotel, 12 miles north of Mombasa on the Indian Ocean. Ten Kenyans, three Israelis and at least two bombers were killed by the blast at the hotel frequented by Israelis.

Al Qaeda then threatened faster, harder strikes against the United States and Israel in a statement attributed to the group that appeared Sunday on a militant Web site.

"The Jewish Crusader coalition will not be safe anywhere from the fighters' attacks," the audio statement said, using a term common among Islamic militants for what they see as a U.S.-Israeli alliance.

"We will hit the most vital centers and we will strike against its strategic operations with all possible means."

The statement was attributed to al Qaeda spokesman Sulaiman Abu Ghaith. The site, which has posted previous statements attributed to the terror network, included what appeared to be a photograph of Abu Ghaith taken from a video frame.

The attacks in Kenya were first claimed by the previously unknown Army of Palestine.

Police are holding more than a dozen people for questioning in connection with the attacks, but Langat has said none of them are really considered to be suspects.