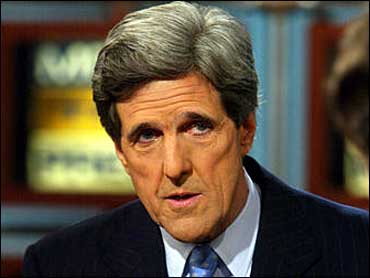 Presidential candidate John Kerry said Monday that democracy affords rival Democrats the right to criticize President Bush even with the nation at war.

The Massachusetts senator has come under a withering attack from Republicans for suggesting that the United States, like Iraq, needs a regime change. Traveling through Iowa, Kerry rejected what he called "phony arguments" from the GOP that political candidates should mute their criticism of the commander in chief.

"This is a democracy," Kerry said. "We could be at war a year from now. Would we put the election on hold?"

Kerry voted last fall for a congressional resolution granting Bush the authority to use military force to oust Saddam Hussein and disarm Iraq, but he has been sharply critical of the Bush administration's diplomatic efforts to assemble a coalition of allies. Last week, Kerry's regime change comment drew fire from top congressional Republicans who said the remarks were highly inappropriate with U.S. troops fighting overseas.

Since then, Kerry, a decorated Vietnam War veteran, has defended himself, arguing that unlike his Republican critics, he fought for his right to speak freely. At an elementary school in Iowa, he reminded his listeners of that past conflict and the political dynamic.

"We had an election in the middle of the Vietnam War," Kerry said. "It was the center of that election."

The lawmaker argued that the disparate views of Democrats should be central to the 2004 election, including where the candidates' stand on how the war is being conducted.

"Let's not have a lot of phony arguments here about what we can and can't talk about," Kerry said. "We need to talk in America about the things that make us strong as a country."

Republicans countered that Kerry himself, last month, said he would not criticize Bush while troops were in action, citing his own experience in the Vietnam War where news of war protests disheartened troops.

"By Sen. Kerry's own standards, set by Kerry himself, those statements would be inappropriate," said Jim Byke, a spokesman for the Republican National Committee.

Despite his attempt to focus on education, Kerry repeatedly was asked about the U.S.-led war against Iraq and his recent comments. Besides the school visit, Kerry has been meeting with small groups of activists during his three-day trip to the site of the leadoff presidential caucuses.

Kerry impressed some listeners, including Susan Lagos, an elementary school principal who has a son in the Army. Lagos wasn't ready to endorse a candidate, but she pointed out, "we teach nonviolence here."

She added, however, "I understand there are times when you have to confront the bully."