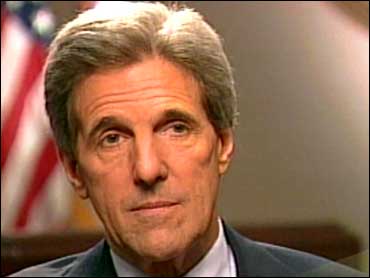 Democratic presidential hopeful John Kerry says he expects a clear winner to emerge when the ballots are counted on election night. He and President George Bush have been neck-and-neck in the polls for weeks.

In an exclusive interview, the Democratic presidential nominee tells The Early Show co-anchor Harry Smith, "I'm prepared, in the sense I'm not going to be taken by surprise. But I don't believe that we're going to have a protracted night. I think we're going to have a decision on Tuesday night and America will move forward."

Kerry also contended that, contrary to the impression President Bush and the Republicans have been trying to pound home from Day One of the campaign, he is tough enough to be president.

"Republicans are trafficking in fear, because they haven't delivered to America the security that we deserve."

Kerry says, "It's what you do that makes a difference. When I turned my boat in Vietnam into an ambush and went straight into the ambush and overran it, I didn't see George Bush or Dick Cheney at my side. So I'm not going to take a second seat to anybody and my willingness to be tough to defend the United States of America. I did it when it mattered and as president, I will defend the United States of America with everything I have."

The Massachusetts senator charges if anything, the Bush White House "has made America less safe. Our military is overextended. The National Guard and Reserves are overextended. I will do a better job than George Bush at making America safe. But I won't make the mistake that George Bush made, ever, of sending our troops into battle without the armor that they deserve and need, without enough troops to get the job done, and without a plan to win the peace."

Kerry discounted the impact Osama bin Laden's sudden reappearance on videotape will have on the voters: "I don't think it plays into anybody's hands and I don't want it to. How dare Osama bin laden enter into the election process of the United States of America? He's a barbarian, killer, assassin and terrorist. And what he'd better understand is, and what everybody had better understand is, we are united as Americans in our determination to hunt him down and capture and kill him. And that's what we're going to do."

Kerry insisted he's truly energized the Democratic base and discounted the assertion that votes for him are really more votes against Mr. Bush.

He also pointed to the GOP charge that he's a "flip-flopper" as the single biggest mischaracterization of him during the campaign. "I've been clear. I am consistent. I'm tough. I'm principled. I know exactly what we need to do."