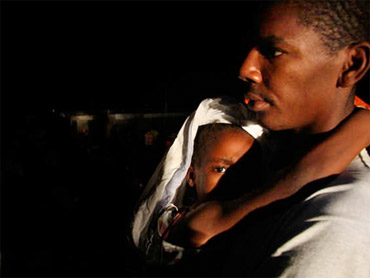 A global relief effort to help Haitian earthquake victims got underway in earnest Thursday, but aid workers - and the people in desperate need of their assistance - face numerous challenges.

Ship deliveries were impossible to Port-au-Prince because the Haitian capital's port was closed due to damage. It airport was opened but strained to handle a flurry of incoming flights carrying experts and aid.

The strain was so severe that U.S. Federal Aviation Administration stopped all civilian flights from the United States to Haiti at the request of the Haitian government, because there is no room on the ground for more planes and not enough jet fuel for planes to go back.

Here's the status of several key areas of concern as the recovery effort continues:

Rescue: Forty search-and-rescue teams from around the world had started arriving in Haiti to look for survivors trapped inside collapsed buildings, Byrs said.

But to find and save people, the rescuers will need heavy equipment to lift tons of rubble. Some teams have that equipment - including ones from Britain and Iceland - but many don't.

Although impoverished Haiti has virtually none of those machines, the neighboring Dominican Republic does and can help meet the need, said Charles Vincent of the World Food Program.

"We'll have to see how that works out over the coming days," said Vincent. "The U.S. military will also be bringing in some equipment."

The U.S. military has completed critical repairs to the airport tower in Port-au-Prince, allowing for the delivery of the much-needed heavy equipment.

U.S. military forklift operators helped unload some foreign flights as well as U.S. cargos and Haitian staff were far outnumbered by foreign aid workers and military, and no senior Haitian officials were visible.

In the city, trucks carrying police and U.N. workers or equipment to clear away debris were often stuck in traffic on roads filled with pickup trucks, cars and pedestrians. At many collapsed buildings, neighbors and volunteers dug through rubble - often with bare hands - to free trapped residents without help from the government.

The heavy equipment will also be needed when the operation's focus shifts from rescue to recovering bodies. Estimates have varied wildly since the quake, with a Haitian senator claiming the death toll might reach as high as 500,000, though he admitted he had no evidence for the claim.

According to the latest Red Cross estimate, there might be 45,000 to 50,000 dead, with another 3 million people in need of assistance.

Communication: Vincent said the lack of working phones and other communication facilities "is still the greatest handicap for everybody" involved in the relief efforts.

While less than 10 percent of the country's population has Internet access, those who do have been able to use social networking sites like Twitter and Facebook to communicate with concerned loved ones in the country and overseas, reports CBS News science and technology correspondent Daniel Sieberg.

And interestingly, technology around the world is being used to raise money for a country largely bereft of it, as donors have contributed millions to aid the victims using text messages.

Food and Water: Vincent said all WFP staff were exhausted because they have been working around-the-clock to care for Haitians who had sought shelter in the agency's parking lot in Port-au-Prince.

"Most of the population has not had food for the whole day yesterday and today," he said.

The U.N. food agency hoped to able to feed people for the next two weeks from warehouses set up to handle previous disasters in Haiti such as hurricanes - as long as the warehouses aren't looted or damaged, he said.

"This is much worse than a hurricane," said Jimitre Coquillon, a doctor's assistant working at a triage center set up in a hotel parking lot. "There's no water. There's nothing. Thirsty people are going to die."

Medical Treatment and Potential for Disease: Rescue workers' window of opportunity is closing fast, as 85 to 95 percent of survivors are pulled out of wreckage within 24 to 48 hours, reports CBS News medical correspondent Dr. Jennifer Ashton.

And once they are, they'll need to be treated. Severe damage to at least eight Port-au-Prince hospitals made it nearly impossible to tend to the thousands of injured or prevent outbreaks of disease, said Paul Garwood, spokesman for the World Health Organization.

Besides the immediate injuries related to the earthquake, survivors likely will face an increased risk of dengue fever, malaria and measles - problems that plagued the impoverished country before, said Kimberley Shoaf, associate director of the UCLA Center for Public Health and Disasters.

Survivors also face the risk of respiratory disease from inhaling dust from collapsed buildings and diarrhea from drinking contaminated water, to say nothing about the health hazards posed by thousands of dead bodies lining the streets.

The presence of dead victims also presents a health hazard. Bodies lay in the street, often covered by a white cloth, in the tropical heat. Some people dragged the dust-covered dead along the roads, trying to reach a hospital where they might leave them.

Others tried to carry dead relatives to nearby hills for impromptu burials, prompting Brazil's military - the biggest continent among U.N. peacekeepers - to warn the practice could lead to an epidemic. It said it is asking authorities to create a new cemetery.

The Brazilian military said it also was worried that bodies could be left too long because many Voodoo followers in Haiti do not allow the dead to be touched before all their rituals are concluded.

In general, the acuteness of the crisis only exacerbates existing problems with Haiti's medical care. In 1998 - the last year of reliable data - there were just two doctors for every 10,000 people, reports Ashton.

Another issue facing the Haitian population is HIV/AIDS infection. Five percent of the country is infected with the deadly disease.

The city, with a population of 2 million people, is largely destroyed. Many of those whose homes survived the initial quake are scared to return as aftershocks have kept residents in a state of panic. So thousands are sleeping in the streets, the same ones littered with dead bodies.

There has been widespread looting of collapsed buildings since the earthquake hit, but rarely of undamaged shops, said Matt Marek, Haiti country representative of the American Red Cross.

A spokesman for the U.S. State Department said the U.S. military is headed to Haiti to "stabilize" the country. The U.S., following priorities laid out by the Haitian government, has made maintaining law and order a key need, said spokesman P.J. Crowley. He said there have been reports of minor looting.

On top of that, the U.N. reported the main prison in Port-au-Prince had collapses and there were reports of escaped inmates on the loose.