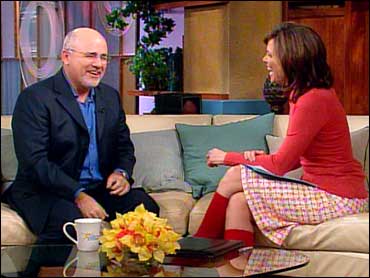 Many of the most common New Year's resolutions involve financial goals. But this week, the tough part begins: actually sticking to those vows.

Author and radio talk show host Dave Ramsey knows how hard it can be to improve your personal balance sheet.

He's gone from rich to broke and fought his way back to millionaire status.

On The Early Show Tuesday, Ramsey told his personal story and offered tips for staying on track to meet financial goals in '06.

In his book, "The Total Money Makeover," Ramsey revealed that he and his wife, Sharon, went from having real estate worth over $4 million to declaring bankruptcy at a time when they had a new baby and toddler. He said that forced a lot of introspection and led him to realize he was his own worst enemy when it came to managing his money. As he put it in the book, "I realized also that if I could learn to manage the character I shaved with every morning, I could win at money."

Ramsey told co-anchor Hannah Storm Tuesday that he learned to change his behavior, stuck to a financial plan, and is again very well-off.

"You can't have a resolution that's a dream," Ramsey said. "You need a goal! This is the time to get resolute about your resolutions."

He says sticking to resolutions isn't easy. If it were, everyone would be rich.

How can people discipline themselves when it comes to money, and making and meeting financial goals?

HAVE THE RIGHT ATTITUDE

Getting control of your money, says Ramsey, is 80 percent behavior, and 20 percent head knowledge. In other words, what you do is more important than what you know. If you're not passionate and intense about achieving your resolutions, you're not going to make it. You have to be "sick and tired of being sick and tired." You have to literally attack your goal. Ramsey says he can tell when people call into his show whether they're going to make it.

For married people, it will certainly be much easier to reach goals if both spouses are on board and equally determined to succeed.

"It's like dragging around dead weight if you're not both on board," Ramsey says, "like a three-legged race where one person doesn't want to play."

HAVE A DEFINITIVE PLAN

"You will hit what you aim at," Ramsey says. "If you aim at nothing, you'll hit that, too."

"All winners set goals," Ramsey says. "When setting goals with money, it's called a budget."

One of Ramsey's favorite phrases is, "You have to do it on purpose, on paper." This plan, or budget, can't just be in your head. You need to write it down and see how all of the pieces fit together. Once you have your plan on paper, you're much more likely to follow through with it.

STAY AWAY FROM TEMPTATION

Don't dwell on your past failures. Look forward. If your resolution starts to seem overwhelming, break it down into smaller pieces. As you begin to achieve these baby steps, you'll be motivated to continue on the path you've set for yourself.

"We live in a society that encourages credit card use, that goads us to have the latest and greatest car, purse, whatever," he says. "By taking responsibility for your money, you're doing something unusual, and it forces you to live like no one else. But your hard work will pay off and then, later, when you are debt-free and wealthy, you'll again be living like no one else."