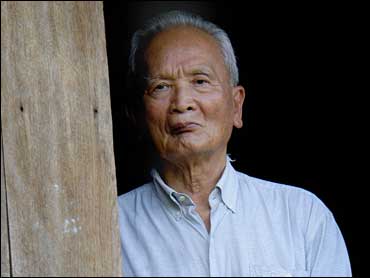 Nuon Chea, the top surviving leader of Cambodia's notorious Khmer Rouge, whose radical policies were responsible for the deaths of an estimated 1.7 million people, was charged Wednesday with crimes against humanity and war crimes.

Nuon Chea, now 82, was arrested early Wednesday morning at his home in Pailin in northwestern Cambodia near the Thai border and flown to the Cambodian capital Phnom Penh, where he was put in the custody of a U.N.-supported genocide tribunal.

The tribunal is investigating abuses committed when the communist Khmer Rouge held power in 1975-79. Their radical policies have been blamed for the deaths of their countrymen from starvation, ill health, overwork and execution.

Some had feared that Nuon Chea and other former Khmer Rouge leaders may die before ever seeing a courtroom. News of his arrest was welcomed by Theary Seng, a Cambodian-American who lost relatives to the Khmer Rouge atrocities.

"Even if we don't see a conviction, at least we have witnessed a process" of searching for justice, said Theary Seng, who is the director of Center for Social Development, a nonprofit group monitoring development of the Khmer Rouge tribunal.

Police surrounded Nuon Chea's home in Pailin in northwestern Cambodia near the Thai border early Wednesday and took him into custody as his son and dozens of onlookers gathered to watch in silence, witnesses said.

Nuon Chea denies any wrongdoing. "My father is happy to shed light on the Khmer Rouge regime for the world and people to understand," Nuon Say said afterward.

He later became the group's chief political ideologue during its rule in the 1970s, when its radical policies caused the deaths of 1.7 million people through hunger, disease, overwork and execution.

Nuon Chea has consistently denied any responsibility for the mass brutality and told The Associated Press in a July interview that he was ready to be judged by an international tribunal.

"I was president of the National Assembly and had nothing to do with the operation of the government," he told the AP. "Sometimes I didn't know what they were doing because I was in the assembly."

"I will go to the court and don't care if people believe me or not," he said.

The U.N.-backed genocide tribunal investigating crimes by the Khmer Rouge was created last year after seven years of contentious negotiations between the United Nations and Cambodia.

Prosecutors for the tribunal have said there are five senior Khmer Rouge figures they have recommended for trial. Nuon Chea is the second, and highest-ranking, Khmer Rouge leader detained to appear before the panel.

Kaing Guek Eav - commonly known as Duch, who headed the former Khmer Rouge S-21 prison - was the first suspect detained by the tribunal on charges of crimes against humanity. He was charged last month. The other suspects have not been publicly named.

Their senior-level colleagues, Ieng Sary, the former foreign minister; and Khieu Samphan, the former head of state, live freely in Cambodia but are in declining health. They are also widely believed to be on the prosecutors' list.

With a $56.3 million budget limited to three years, trials had been expected to start this year.

But Cambodian and foreign judges spent much of the year bickering about rules and protocols, including the setting of expensive legal fees for foreign lawyers wanting to take part in the proceedings.

The tribunal is an unprecedented hybrid, with Cambodian judges holding the majority in decision-making matters but needing one supportive vote from a foreign counterpart to reach a super-majority to prevail.

It is operated under the Cambodian judicial system, often described by critics as weak, corrupt and susceptible to political manipulation.