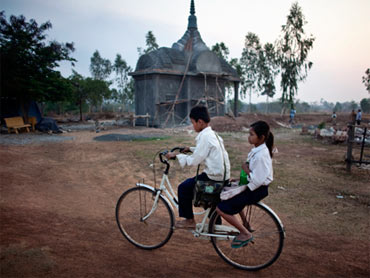 Cambodia will preserve 14 sites at the last bastion of the murderous Khmer Rouge, including the home of their leader Pol Pot, as tourist attractions, an official said Wednesday.

Anlong Veng, about 185 miles north of Phnom Penh, fell to government forces in 1998 after nearly 20 years of fighting.

The Khmer Rouge regime, under which an estimated 1.7 million people died from execution, disease and malnutrition, was toppled in 1979 but its guerrillas fought on in the jungles, with Anlong Veng becoming their last stronghold.

Yim Phana said the 14 sites include homes belonging to Khmer Rouge leaders, an ammunition warehouse and the grave of Pol Pot, who died in 1998.

Once a remote town, Anlong Veng is now connected by good roads to nearby Thailand and Cambodia's greatest tourist attractions, the temples of Angkor.