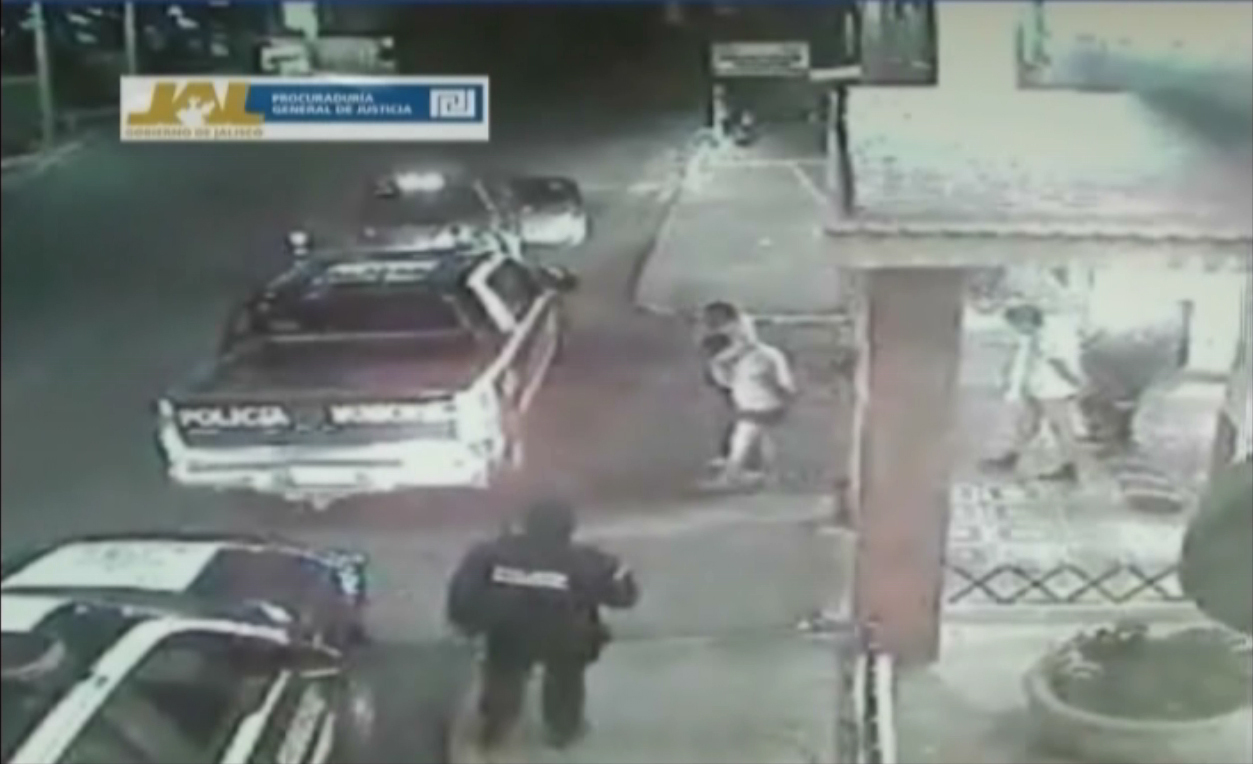 (AP) MEXICO CITY - There it was on video: Five heavily armed policemen barge into a hotel in western Mexico before dawn and march out with three handcuffed men in underwear.

But police weren't making an arrest. Prosecutors say they apparently were taking orders from criminals. Just hours after the three were seized, they were found asphyxiated and beaten to death.

Mexicans have become inured to lurid tales of police collaboration with narcotics gangs during 5 years of a drug war that has cost more than 47,500 lives. But seldom can they actually see it occur, and the video broadcast on national television was a shocker.


"One assumes that in some cities ... the municipal police work for the drug cartels," said Jorge Chabat an expert on security and drug trafficking at the Center for Economic Research and Teaching. "But what is different here is that there is a video. It's not the same thing to imagine that this going on, and to see it."

The Jan. 20 video released by prosecutors late Wednesday shows a police truck pulling up to the hotel in the city of Lagos de Moreno, quickly followed by a pickup carrying four armed men in civilian clothing. A city policeman carrying an assault rifle runs over to their truck and is given what appears to be a list. Then he and his fellow officers trot into the hotel and present the list at the reception desk, apparently asking what rooms the men are staying in.

In the next segment of the video, the victims are trotted out of the hotel in their underwear with their hands cuffed behind their backs. One is being hustled along by a man in civilian dress, who stuffs him into a patrol car. The gunmen - police are investigating whether they belong to the Jalisco New Generation drug gang - appear to be calling the shots throughout, with the police officers serving as gofers.

The police then watch and wait in front of the hotel while the men's luggage and vehicle are stolen. Finally, the police truck carrying the victims follows the gunmen as they drive away in the own pickup and the stolen vehicle.

While the kidnapping and murder occurred in January, and the faces of several officers were clearly seen on the videos, the officers were not detained until June 6, when soldiers and state police raided a local police station. And they still have not been formally charged with any crime.

"It took time to obtain the video tapes, to do the investigation, and to get the arrest warrants," said Jalisco state prosecutor's spokesman Lino Gonzalez said Thursday. "We didn't have the information."

In any case, the release of the dramatic images comes less than three weeks before national and state elections in which security is a major issue. Critics accuse President Felipe Calderon of setting off a bloodbath with his strategy against gangs, while his party's presidential candidate, Josefina Vazquez, has suggested her opponents are ready to compromise with the cartels.

Jalisco is governed by Calderon's party. The man who was mayor of Lagos de Moreno when the video was shot is now a rival party's candidate for the state legislature.

Gonzalez said that so far, seven policemen and officials of the municipal police force of Lagos de Moreno have been detained pending charges. And state Attorney General Tomas Coronado said the four men in civilian clothing also have been detained separately in other cases. He declined to say what gang they might belong to.

There are still mysteries surrounding the case, including whether the gunmen thought the victims were members of a rival drug cartel. The victims were from the northern state of Coahuila, where the hyperviolent Zetas cartel has been battling the Sinaloa cartel, allies of the local Jalisco Nueva Generacion gang.

Gonzalez said the victims, before checking into the hotel, had been briefly detained by police at the local jail for a minor infraction. They paid a fine and were released. But while in custody, "They said something indiscrete," Gonzalez said. "Apparently they said something like `We're from Coahuila, and we're part of the mafia."'

It's not unusual in Mexico for detainees to boast about their connections, hoping to press corrupt police to release them.

This time, however, it backfired.

"Apparently, somebody at the jail heard the comment, and reported it to the real criminals," Gonzalez said.

Coronado told local media the men had claimed to be Zetas.

Gonzalez said it has never been proved the kidnapped men were gang members. They may have just been in Lagos de Moreno collecting the rent on a ranch, and they are being treated simply as victims.

Chabat noted that corruption has reached so deep that in 2010 in the northern state of Nuevo Leon, seven local police officers in the town of Santiago were arrested on allegations they were working for the Zetas drug gang and that they kidnapped and killed the town's Mayor, Edelmiro Cavazos, in retaliation for his attempts to cut corruption.

"There are police officers who kill the mayors they are supposed to protect," Chabat said. But this week's video "is cause for despair," he said. "It gives rise to the feeling that this is not going to be solved in the short term."