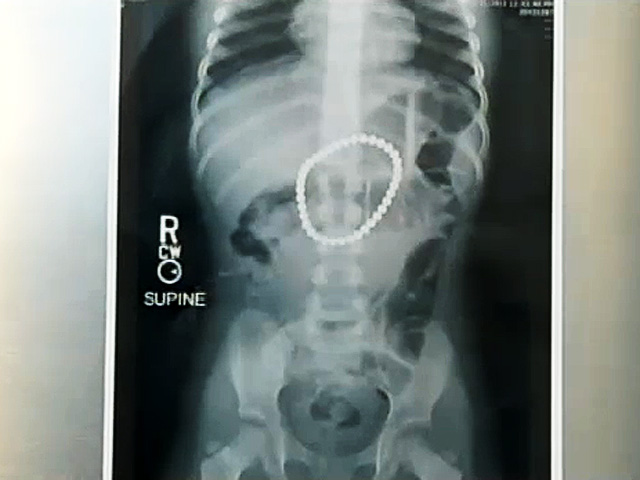 Children may be in awe of how magnets work, but doctors are warning that the common household items can be a serious health hazard if kids shove them in their mouths.

A study published Aug. 6 in the Annals of Emergency Medicine found that emergency room cases of children ingesting magnets increased five-fold between 2002 and 2011. Some kids experienced severe damage to their intestinal walls that required surgery after swallowing several magnets.

"It is common for children to put things in their mouth and nose, but the risk of intestinal damage increases dramatically when multiple magnets are swallowed," lead study author Dr. Jonathan Silverman, from the department of pediatrics at the University of Washington in Seattle, Wash., said in a press release. "The magnets in question were typically those found in kitchen gadgets or desk toys marketed to adults but irresistible to children."

"Ten years ago, you did not see that," Dr. Michael Morowitz, a surgeon with the Children's Hospital of Pittsburgh of University of Pennsylvania Medical Center, told CBS Pittsburgh. "We've actually seen cases at Children's Hospital, and similar to recent reports in the literature, the number of cases is rising."

Multiple magnets posed added health risks. About 15.7 percent of the kids were admitted to the hospital after they swallowed more than one magnet, while only 2.3 percent of children who ingested only one magnet needed further hospital care.

If more than one magnet is swallowed, it could pinch the intestinal walls and lead to inflammation, ulceration or rip holes through the intestines. Left untreated, these conditions could lead to sepsis -- a dangerous bodily response to bacteria -- or death.

Unless you see a child swallow a magnet or magnets, it could be tough to tell what's causing their illness. Symptoms from swallowing magnets appear flu-like and include nausea, vomiting and abdominal pain.

Morowitz, who was not involved in the study, added that it was not out of the ordinary to see kids with up to 10 or 20 magnets in their intestines at one time. While the patient typically survives, they often have to undergo surgery to remove part of the intestine and fix damage.

Children who have had magnets removed successfully have experienced intestinal scarring, nutritional deficiencies or fertility issues if they were women.

The researchers pointed out it's not just young children who were victims -- older children had a disproportionate number of nasal injuries, perhaps from imitating piercings.

Last year, a Portland, Ore. girl swallowed 37 Buckyballs, a magnetic desk ornament. Her family thought she initially had the stomach flu. An X-ray showed she had a circular chain of magnets in her stomach. The magnets pincher her intestines together and ripped three holes through her lower intestine and one in her stomach,requiring surgery.

"I think we're dealing with items that on the surface don't necessarily seem that dangerous, but without question, particularly because the newer magnets are so strong, there is a health risk," Morowitz said.