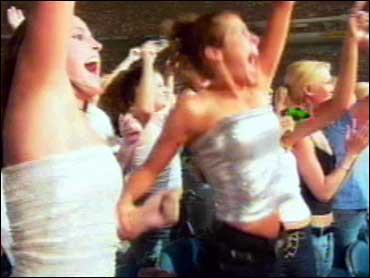 Use a little slang and you've got their attention. That seems to be the growing thought in corporate America and the media, eager to hook the younger crowd.

Some sportscasters have started describing impressive plays as "sick." Before that, Budweiser ads helped place the greeting "Whassup" in the American lexicon.

But those are the rare cases that don't draw groans and eye-rolling from the young crowd. More often, young people say adults shouldn't even think about using lingo from the streets, hip-hop clubs and school hallways.

"Uh-uhhh, they need to quit," says Aurielle McIntosh, a seventh-grader from the Chicago suburb of Oak Park. "They just look silly."

That goes for just about anybody over 30. Aurielle says she and others can't help but giggle, for example, when their social studies teacher shouts, "Roll out!" - the title of a hit song by rapper Ludacris.

Some news organizations are getting into the act.

In an e-mail leaked this fall to other media outlets, a CNN Headline News producer gave his staff a slang dictionary and a suggestion. "Please use this guide to help all you homeys and honeys add a new flava to your tickers and dekkos," the message said, referring to graphics on the TV screen.

"I would sort of chuckle at it, although it would catch my eye," says 14-year-old Guy Weltcheck of South Orange, N.J. "But what are they going to say? Something like 'Yo, yo, yo - what up, Saddam?"'

Another problem: The slang adults use is often out of date.

CNN's slang dictionary, for example, has an old definition for "ill," which once meant strange or obnoxious. Now it means just the opposite - as in, "That DJ rocks. She plays the illest music."

In yet another ad, America Online uses slang for its new broadband service - "phat sounds to fat pipes." Phat, in that case, means rich, luscious, big.

But Kenny Ong, a graphic design student at the Art Institute of California-Orange County, says you are much more likely to hear students there say "that's butter" or "that's gravy" instead of phat.

Elsewhere, others prefer "slammin"' and "tight" to describe something they like. And at parties, some like to get "crunked up."

It's no surprise that most adults don't know that, says Paul McFedries, creator of an online catalog of terms called Wordspy.com.

"Slang is meant to be separate," he says. In other words, if adults are using it, it's not cool anymore.

"I think the smartest advertisers are realizing that it's more about understanding youth culture than using their language," says Tina Wells, Buzz Marketing's 22-year-old chief executive.

Jameel Spencer, president and partner of Blue Flame Marketing Advertising, agrees. "It's really about being respectful," says Spencer, whose company is led by music executive Sean "P. Diddy" Combs. "Any culture wants to be respected - it doesn't want to be seen as a mockery."

Sometimes slang in ads can be funny, says Steve Messam, a junior and football player at Central Michigan University. He thought the Budweiser "Whassup" campaign, which began with younger black guys loudly greeting one another, worked well.

"I'm sure a lot of black people laughed because they know somebody - some family member or friend - who says that," says Messam, who is black. "And it translated well to white culture, too," he adds, noting later commercials that poked fun at nerdy white guys.

Emily Hall, a white teacher at a predominantly black junior high in Columbus, Ohio, uses it to get students' attention. "Don't play with me!" she sternly warns those who act up. But generally, she waits to use slang until she knows students better.