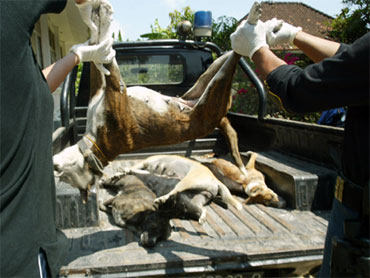 Officials have not been able to stop persistent outbreaks of rabies on the Indonesian Island of Bali.

Since the rabies outbreak was first announced in late 2008, there have been 78 reported deaths on the island - one of Asia's top tourist destinations. Many other deaths have likely gone unreported.

Now stocks of an anti-rabies vaccine for humans are low and could run out.

Government officials told the Jakarta Post that six of Bali's eight regencies - Karangasem, Tabanan, Bangli, Jembrana, Klungkung and Buleleng - had no supplies of anti-rabies vaccines. There was concern that poor patients would not be able to travel to obtain anti-rabies shots.

Animal organizations like the Australia-based Bali Street Dog Fund have vaccinated thousands of dogs in Bali, but health officials have also engaged in widespread campaigns to cull stray canines.

In a highly-criticized move, officials have killed about 200,000 dogs since the outbreak began, instead of initially conducting mass vaccinations as recommended by the World Health Organization.

According to Vets Beyond Borders, indiscriminate culling of animals is ineffective at controlling the disease.

Rabies kills some 55,000 people annually - mostly children - with nearly 60 percent of those deaths from dog bites in Asia.

Bali was once considered rabies-free.