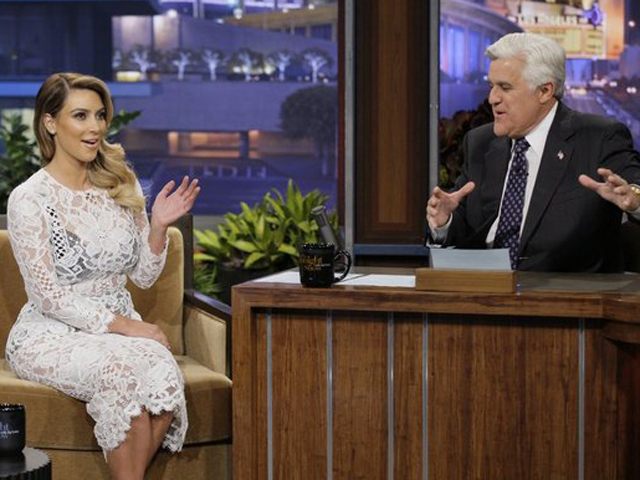 Kim Kardashian opened up about everything from her upcoming nuptials to that oh-so-click-worthy selfie during a visit to "The Tonight Show with Jay Leno" on Wednesday.

The new mom -- wearing a white lacey see-through dress -- explained the reason why she posted the now-famous photo of herself in a white swimsuit on Instagram. "I was trying on a bathing suit, and I actually just sent that to my boyfriend, my fiance, and I was like, 'Babe, can I post this up? This is my big, like, middle finger to the world on everyone that called me fat,'" she said.

Kardashian, 33, admitted that criticism of her weight gain "hurt my soul," saying, "I was gaining weight because I was pregnant, and it was just really hard to read all these stories and hear all these nasty things...Why would I subject myself to so much negativity, especially now that I have a daughter?...I've definitely tried to live more of a private life because of that."

She ended up losing 50 pounds after giving birth by working out and following the Atkins diet.

And about those wedding plans...Kardashian said she and Kanye West are eyeing a summer 2014 wedding. They're keeping their options open at the moment, Kardashian said, but it could take place "somewhere destinational" like Paris or Italy. "Maybe I'll pick the place and then he can plan it," she said.

And once they make it official, the Kardashian name will stay in some capacity, but with a twist: "I'm probably going to have Kardashian as my middle name and then West. My daughter has the last name West, and we're a family, so I want to definitely be West."

West, 36, popped the question earlier this month with an elaborate proposal in San Francisco that wascaught on tape. "It was the most magical night of my life," Kardashian said, adding, "I was shaking the entire time."