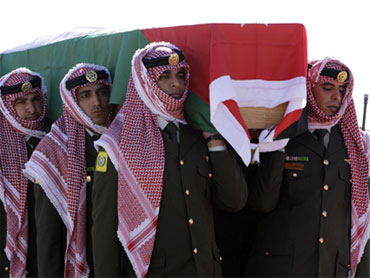 Relatives and friends of the Jordanian suspected as a double agent who killed eight people on a CIA base in Afghanistan say he wanted to die in a holy war, and wrote fiery Internet articles calling for jihad against the U.S. and Israel.

High-school friend Mohammed Yousef said al-Balawi fooled family and friends, telling them in March he was going to Turkey to study.

Al-Balawi was arrested more than a year ago by Jordanian intelligence and was thought to have been persuaded to support U.S. and Jordanian efforts against al Qaeda, according to the NBC report. He was invited to Camp Chapman, a tightly secured CIA forward base in Khost province on the fractious Afghan-Pakistan frontier, because he was offering urgent information to track down Ayman al-Zawahiri, Osama bin Laden's right-hand man.

Hajj Yacoub, a self-proclaimed spokesman for the Taliban in Pakistan, identified the bomber on Muslim militant Web sites as Hammam Khalil Mohammed, also known as Abu-Dujana al-Khurasani. There was no independent confirmation of Yacoub's statement.

Al-Balawi was not searched for bombs when he got onto Camp Chapman, according to both former officials and a current intelligence official.

He detonated the explosive shortly after his debriefing began, according to one of the former intelligence officials. In addition to the eight dead, there were at least six wounded, according to the CIA.

The former senior intelligence official said one of the big unanswered questions is why so many people were present for the debriefing - the interview of the source - when the explosive was detonated.

A half-dozen former CIA officers told The Associated Press that in most cases, only one or two agency officers would typically meet with a possible informant along with an interpreter. Such small meetings would normally be used to limit the danger and the possible exposure of the identities of both officers and informants.

An online jihadist magazine in September 2009 posted an interview with al-Balawi, according to SITE Monitoring Service, a terrorist watch group that reads and translates messages on extremist forums.

SITE said Monday that al-Balawi used his pseudonym - identified as Khorsani - in the postings, describing how he rose through the ranks of online jihadist forums. He said he went to Afghanistan to fight, and he exhorted others to do violence.

"No words are more eloquent than those proven by acts, so that if that Muslim survives, he will be one who proves his words with acts. If he dies in the Cause of Allah, he will grant his words glory that will be permanent marks on the path to guide to jihad, with permission from Allah," al-Balawi wrote, according to SITE's translation.

Jordan's state news agency Petra identified bin Zaid as an army officer on a humanitarian mission in Afghanistan. It said he was killed Wednesday evening "as a martyr while performing the sacred duty of the Jordanian forces in Afghanistan." It did not provide other details.

The Jordanian military released a brief statement acknowledging bin Zaid had been killed in Afghanistan, but it did not mention he was working with Jordanian intelligence or cooperating with the CIA.

Bin Zaid is known to be a relative of Jordan's King Abdullah II. He held the title of sharif, or nobleman, which was bestowed upon him by the Jordanian monarch.

King Abdullah and other members of the royal family received Bin Zaid's body, which was repatriated Saturday in a private ceremony. His wake was held in the Royal Palace.

The death of bin Zaid underscored the close relationship between the Jordanian intelligence service and the CIA in the U.S. global war on terrorism.

Jordan is known to have acted as a proxy jailer for the CIA in 2004, when Jordanian intelligence officers interrogated several al Qaeda militants who were flew in on rendition flights from Guantanamo Bay.

The New York-based Human Rights Watch and several other watchdogs rebuked Jordan for what they described then as systematic torture of the detainees. Jordan denied the link to the CIA and the abuse allegations.

A key U.S. ally in the Mideast, Jordan also contributed valuable intelligence data to the United States, which helped track down the former al Qaeda in Iraq leader, Jordanian-born Abu Musab al-Zarqawi, in 2006. Al-Zarqawi was killed in a U.S. airstrike in Iraq in June that year.