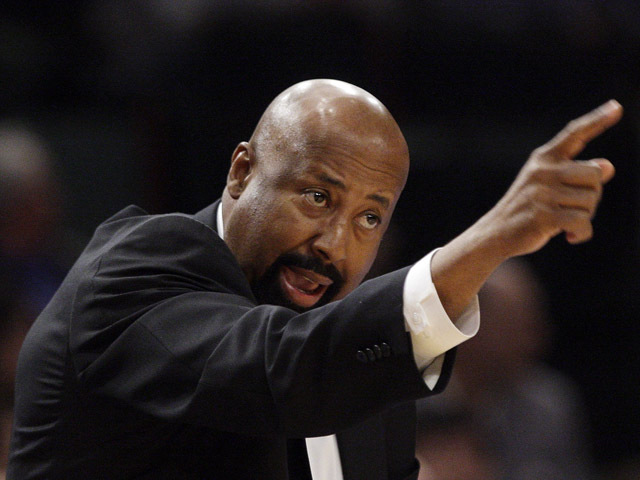 (AP) NEW YORK - One playoff victory was good enough for Mike Woodson to return as New York Knicks coach — even with Phil Jackson lurking as a potential candidate.

Woodson knows more will be asked of him now.

"I know expectations are high and they should be high," Woodson said during a conference call, "and I'm looking forward to the challenge."

The Knicks removed the interim tag Friday and announced they had given Woodson a multiyear contract extension, rewarding him for a terrific finish to what had been a turbulent season.

Woodson led the Knicks to an 18-6 record after replacing Mike D'Antoni on March 14. The Knicks lost 4-1 to Miami in the first round, snapping an NBA-record, 13-game postseason losing streak by winning Game 4 for their first victory since 2001.

Still, there was speculation that Madison Square Garden chairman James Dolan would open one of the league's biggest check books to go after Jackson, the 11-time champion coach and former Knicks player who sat out last season after retiring from the Los Angeles Lakers.

Yet the Knicks never looked anywhere beyond Woodson, believing they can continue to improve with a full season of his coaching.

"We thought he was the right guy for this team at this time. Obviously, there's some great coaches out there that had we opened up the search would have been called, mainly Phil Jackson, who's the most successful coach in the NBA history, but we felt Woody was our guy and he showed it during the season and our discussions after the season."

Woodson shrugged off the Jackson speculation.

"Tremendous coach, I know his name's been mentioned a lot, but that was not my concern," Woodson said. "My concern at the time was coaching the New York Knicks the period that I had to coach and Mr. Dolan decided to bring me back."

Neither the Knicks nor Woodson would disclose the terms of the deal.

A first-round draft pick of the Knicks in 1980, Woodson returned to the team last summer as an assistant coach, providing a defensive-minded voice to D'Antoni's staff. Woodson's influence, combined with Defensive Player of the Year Tyson Chandler, moved the Knicks into the top half of the league's defensive rankings after they had been one the worst teams for years.

D'Antoni resigned March 14 when the Knicks were 18-24 and in danger of missing the playoffs. Woodson won his first five games and was praised by players for holding them more accountable to playing defense. Most importantly, he got the most out of Carmelo Anthony, who was having a disappointing season in D'Antoni's offense but was April's Eastern Conference player of the month.

"Mike took over the team under challenging circumstances and made it clear, starting on day one, that he was going to hold every player on our roster accountable," Dolan said in a statement. "We saw a significant improvement since Mike took over and believe our team will only keep improving under Mike's direction."

Woodson denied recent reports that he had replaced agent Joe Glass under pressure from Dolan to avoid having to work again with former coach Larry Brown's representation. Woodson confirmed he switched to CAA, but said it was his choice, and that agent Terry Prince had worked on his contract.

Anthony, Chandler and fellow star Amare Stoudemire had all backed Woodson's return when the season ended. And his chances of improving returned when the Knicks removed the interim tag from Grunwald, his former college teammate at Indiana, late in the regular season.

Woodson previously spent six seasons as coach of the Atlanta Hawks, improving his win total in every season until they went 53-29 in 2009-10. But he wasn't retained after they were swept in the conference semifinals for the second straight year.

He then sat out a year before interviewing last summer for openings in Detroit — where he was an assistant on the Pistons' NBA championship team in 2004 — Minnesota and Houston. He then was hired by the Knicks on Aug. 29.