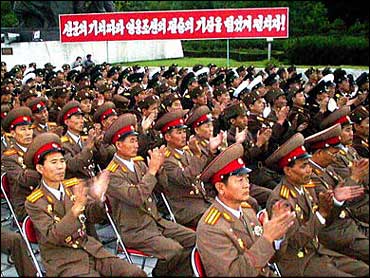 In the five decades since the Korean War, South Korea has blossomed from ruin into a vibrant, wealthy democracy. Totalitarian North Korea has sunk into isolation and poverty, yet its nuclear ambitions make it a source of global anxiety.

The two have never reached a formal peace, so commemorations will be somber Sunday in the South to mark the 50th anniversary of the armistice that ended the war. More than 1,000 war veterans, many from the U.S.-led United Nations force that backed South Korea, will gather at Panmunjom, the truce village where the ceasefire was signed. An evening ceremony will be held at the U.S. military headquarters in Seoul.

North Korea, however, is marking the anniversary with celebrations because its propaganda machine has always described the war as a victory for communist forces, rather than as the stalemate it was. Red banners recalling the North's ``triumph'' hang prominently in Pyongyang's main square.

Vice President Dick Cheney was on hand at Arlington National Cemetery in Virginia to lay a wreath in honor of the U.S. soldiers that were killed in the war. A somber Cheney stood as a bugler played "Taps.'"

In a reminder of the uneasiness that lingers along the world's most heavily armed border, the North's military used characteristically belligerent rhetoric Saturday to warn of the potential for a new war.

U.S. officials, who believe North Korea already has one or two nuclear bombs, are seeking a diplomatic solution to entice the North to give up its nuclear prorgram, and South Korean officials say talks with the North could come in August. But Washington also is keeping up pressure on the North by refusing its demand for a non-aggression pact and has considered stepping up economic sanctions on the impoverished communist nation.

"Resolving the nuclear and related security issues has got to be the most pressing priority," Annan said. "The 50th anniversary offers an opportunity to disperse the ominous cloud that, for too long, has threatened the stability and prosperity of the Korean Peninsula."

No resolution appears imminent, and a Japanese newspaper reported Saturday that North Korea has threatened to conduct a nuclear weapons test if the United States does not respond positively in their dialogue to resolve the dispute.

The warning was given during unofficial contacts between a North Korean official and U.S. envoy Jack Pritchard in New York earlier this month, the Asahi Shimbun said, quoting unidentified Japanese and North Korean sources.

North Korea wants security guarantees and economic aid from the United States, though U.S. officials are skeptical the regime in Pyongyang is willing to give up its nuclear option in return. The nuclear dispute flared in October, when U.S. officials said North Korea admitted having a secret nuclear program in violation of international agreements.

The International Committee of the Red Cross called attention to the plight of families who were separated by the 1950-53 Korean War and have not seen their loved ones since. The two Koreas have held some brief reunions for a few families since relations improved after a summit in 2000.

"Both in Seoul and in Pyongyang, the seriousness of the problem is acknowledged. The situation of elderly people, in particular, is of urgent concern," a Red Cross statement said. It urged the two Koreas to stage family visits more frequently.

On Saturday, Benjamin Whitchurch and about 70 other British veterans attended a commemorative ceremony at a former battlefield near the mine-laden border with North Korea. Britain fought as a member of the 16-nation U.N. force against China- and Soviet-backed North Korea.

"Pray to God it doesn't happen again,'' Whitchurch said. ``It would be an annihilation."

Elsewhere in Seoul, police officials interrogated 20 students on Saturday who barged into a U.S. military base and burned an American flag.

The students forced their way into the military compound on Friday, demanding the withdrawal of 37,000 U.S. troops stationed in South Korea, police said.

The protesters then set fire to a U.S. flag.

South Korean police removed the demonstrators and arrested them.

Radical student activists have accused the United States of plotting a war against North Korea amid the standoff over the communist country's suspected development of nuclear weapons.