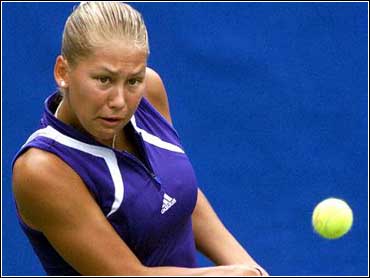 Anna Kournikova has changed her mind and will not play tennis at the Sydney Olympics because of scheduling conflicts.

The 19-year-old Russian had said earlier this year she would definitely compete. But Alexei Selivanenko, vice president of the Russian Tennis Federation, announced the switch in plans Tuesday.

Martina Hingis, the world's No. 1 player, also said she won't compete because the Olympics are too close to the U.S. Open.

Kournikova lives in the United States, and she has angered many Russian sports fans for her repeated refusal to play for Russia. In one of her few performances for Russia, in the Fed Cup last April, Kournikova played poorly and was booed by Russian fans.

But this spring, Kournikova said she hadn't competed for Russia in the past because of injuries.

"I've always wanted to play for my country, I just happened to have really big injuries in the past two years," Kournikova said at the time.

Without Kournikova, Russia will send Elena Likhovtseva , Elena Dementieva, and Anastasia Myskina, said Alexander Kalivod, the federation's general secretary. He said Yevgeny Kafelnikov and Marat Safin would play on the men's side.

"You're absolutely right we wanted her to play," Kalivod said.