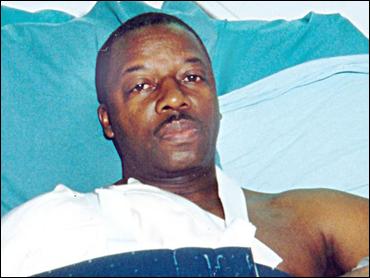 A judge on Wednesday found a Kuwaiti policeman guilty in a shooting attack that wounded two U.S. soldiers and sentenced him to a total of 15 years in prison.

"This is not fair, your honor!" Khaled al-Shimmiri, who had pleaded insanity, shouted from the dock when the verdict and sentence was read.

In addition to the sentence of 10 years for attempted murder and five for unlawful possession of a weapon, to be served consecutively, Judge Nayef al-Mutairat ordered al-Shimmiri, 20, to be dismissed from the Kuwaiti police force. Prosecutors had asked for the harshest possible sentence, life in prison.

The shooting came amid growing anti-American sentiment in this small oil-rich ally of Washington, where tens of thousands of U.S. troops are massing ahead of a possible war on Iraq. Across the Arab world, the threatened U.S. attack on Iraq has been portrayed as part of an alleged American campaign to control Arab lands and wealth.

Master Sgt. Larry Thomas, 51 and Sgt. Charles Ellis, 27, both reservists from Lake Charles, Louisiana, were driving along a Kuwait desert highway on Nov. 21 when al-Shimmiri, in a patrol car, flagged them down, ostensibly for speeding, and shot and seriously wounded them.

Though as a policeman al-Shimmiri was authorized to carry a gun, he had called in sick that day and therefore, officials said, should not have had his weapon, leading to the unlawful possession charge.

Al-Shimmiri's lawyer had questioned why his superiors allowed him access to a gun at all given that he had been under psychiatric care for months before the shooting.

"The man on trial has lost his mind … he has committed his crime in a heated political situation," lawyer Nawwaf al-Mutairi had told the court earlier Wednesday.

Al-Shimmiri had testified that he didn't remember the shooting and had no motive for such an attack.

Government psychiatrists asked by prosecutors to evaluate al-Shimmiri concluded he had bipolar disorder that made him overactive, hallucinate, irritable and sleepless at times, but that he was "responsible for his actions."

Lawyer al-Mutairi told the court Wednesday that the government psychiatrists' evaluation of his client should not be given weight because they examined him for only a half hour.

"Is it possible to put the fate of the defendant and his family on the line because of a report that was issued based on half an hour?" al-Mutairi said.

Al-Mutairi said al-Shimmiri's own psychiatrist, whom he had been seeing for six months, had told the court the policeman was not responsible for his actions.

Al-Shimmiri is not known to have any connections with Muslim fundamentalists.

In October, Muslim fundamentalists killed one U.S. Marine and injured another as they trained in Kuwait. More recently, Islamic extremists were accused of shooting and killing one American civilian and wounding another, both of whom had been working for the U.S. military here.

The large and growing U.S. presence in Kuwait leaves a large footprint because of the country's size — with just over 2 million people, Kuwait is less populous that metropolitan Chicago and covers an area smaller than the state of New Jersey.

The increasing signs of danger to Americans led the State Department in January to approve the evacuation of diplomats' family members and none-emergency consular personnel.

Private U.S. citizens, the department warned, "should evaluate rigorously their own security situation and are strongly urged to consider departing."