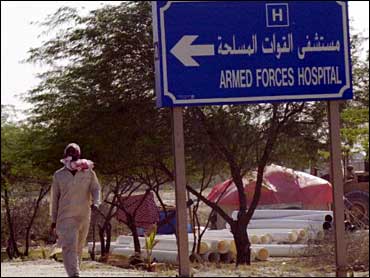 Two U.S. Army soldiers were seriously wounded Thursday on a highway south of Kuwait City, the latest in a string of attacks on American troops as the United States prepares for a possible war in neighboring Iraq.

A Kuwaiti Interior Ministry official, speaking on condition of anonymity, said the attacker was a police sergeant who used his government issue weapon to fire at the two soldiers at close range, and then fled to Saudi Arabia.

"He stopped them and he shot at them" before driving across Kuwait's southern border into neighboring Saudi Arabia, the official told The Associated Press. The official said had no details about the policeman's motive to shoot the officers.

The two soldiers are in serious but stable condition.

"One of the soldiers was shot in the face, and the other in the shoulder," Central Command spokesman Cmdr. Frank Merriman told CBS Radio News. "Neither injury is considered life-threatening."

A Kuwaiti official, speaking on condition of anonymity, said it appeared the two Americans, who were dressed in civilian clothes and traveling in a civilian vehicle, were flagged down by a police car.

The shooting took place about 10:30 a.m. while the victims were traveling between the U.S. military base of Camp Doha and the town of Oraifijan, some 35 miles south of Kuwait City.

The soldiers reportedly did not return fire. The victims managed to drive to Oraifijan, where they had been headed on "official business," before being airlifted for medical treatment.

The attack is the latest in a series of incidents involving U.S. troops in this oil-rich nation which borders Iraq. On Oct. 8, two Islamic fundamentalists shot and killed a U.S. Marine and wounded another on the island of Failaka. Both attackers were killed by other Marines.

Six days later, the U.S. military reported that shots were fired at its troops from two civilian vehicles in Kuwait's northwest, which the government closed off to civilians early this month.

About 10,000 U.S. military personnel are based in Kuwait under a defense pact signed between both countries following the 1991 Gulf War, during which an American-led coalition drive Iraqi invaders from the country.

While Kuwait owes its independence and security to U.S. forces, anti-American sentiment is rising here and elsewhere in the Middle East because of U.S. support for Israel, the war against terrorism and threats of an American attack on Iraq.

The victims were not identified, but a woman told KPLC-TV in Lake Charles, La., that Army officials told her one of the wounded soldiers was her brother, Larry Charles Thomas, of Lake Charles. Rose Thomas said her brother underwent surgery Thursday.

The U.S. Embassy said there was no evidence the attack was linked to terrorism. In Prague, Defense Secretary Donald H. Rumsfeld said the attack was not necessarily linked to the U.S. military buildup in Kuwait in anticipation of possible military action against Iraq.

"There have been terrorist attacks in that region for my entire adult lifetime, and that's a long time," said the 70-year-old defense secretary, who was attending the NATO summit in the Czech capital.

The attack was the most serious against U.S. forces here since Oct. 8, when one U.S. Marine was killed and another wounded by two Islamic fundamentalists, who were shot dead by other Marines.

U.S. and Kuwaiti officials have played down several subsequent incidents in which gunshots were heard near American forces. Those were blamed on hunters and officials from both countries stressed that there was no evidence Americans were targeted.

However, the shooting Thursday appeared to confirm the belief that the presence of 10,000 U.S. troops and negative views of American policy in the region are fueling anti-Americanism, even though the government and many Kuwaitis support the U.S. military's role here.

The U.S. military personnel are based in Kuwait under a defense pact signed between both countries following the 1991 Gulf War, during which an American-led coalition drive Iraqi invaders from the country.