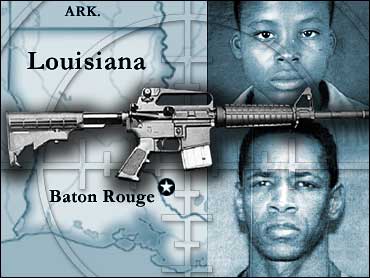 Ballistic tests have matched the rifle used in the Washington-area sniper killings with at least one fatal shooting in Baton Rouge, La., a law enforcement official said Thursday.

The Bureau of Alcohol, Tobacco and Firearms confirmed that the same Bushmaster .223-caliber rifle was involved, said the official, speaking on condition of anonymity.

With the match, the same rifle has been tied to shootings in four states. Earlier Thursday, Alabama authorities said the weapon was linked to a September liquor store robbery and killing.

John Allen Muhammad, 41, and John Lee Malvo, 17, face multiple state and federal charges for the shooting in Alabama and the series of sniper shootings in Maryland, Virginia and the District of Columbia that left 10 dead and 13 wounded.

A bullet recovered from the scene of a Sept. 23 killing of a beauty supply worker during a robbery in Baton Rouge came from the sniper rifle, the official said. The victim was shot once in the head. Witnesses described the gunman as a young black man who fled into a park.

It also is possible that the rifle was involved in a second shooting in Baton Rouge that did not result in a fatality, the official said. Details of that case were not immediately available. Baton Rouge police are seeking DNA samples from both suspects. They are investigating any links with the murders of three women between fall 2001 and last summer.

Muhammad, formerly known as John Allen Williams, grew up in Baton Rouge and still has relatives and friends there, including one of his ex-wives. He visited the area this summer, friends said.

"I would never have thought John would be involved in anything of this nature. He was just a beautiful person. He was a loveable person," his aunt, Yvonne Bradford-Williams, told CBS News.

Muhammad and Malvo have been in federal custody since their Oct. 24 arrest at a Maryland rest stop. Authorities recovered the Bushmaster rifle from the 1990 Chevrolet Caprice in which the two were found sleeping; that car had a hole in the trunk that could allow someone to fire shots undetected.

Attorney General John Ashcroft is considering whether the federal government will take the lead in prosecuting the two or have the first trials in Maryland, Virginia or elsewhere. Muhammad and possibly Malvo could face the death penalty if convicted on the charges filed so far.

Now, police around the nation are taking another look at unsolved murders for any ties to the Washington, D.C.-area sniper attacks, as they explore the full breadth of the singular crime wave.

Authorities have already laid charges in Alabama and linked two shooting cases in Washington state, all with ballistics evidence. In at least three other states, police have identified specific murder cases they believe could be linked — but with little real evidence so far.

The task has been daunting.

Muhammad and Malvo have lived in or drifted through many states and spent time in the Caribbean.

Beyond charges in the Alabama robbery-murder, police have linked Muhammad to other seemingly disparate crimes — an apparent rage killing at a home and an attack on a synagogue, both in Washington state. The capital-area sniper demanded $10 million — a twist that further expands the range of possible criminal methods and motives.

"It's difficult because he could reasonably be a suspect in just about anything," said Stanton Samenow, a psychologist who evaluates violent criminals for the courts and wrote "Inside the Criminal Mind."

Spurred by a national advisory from the Maryland-based sniper task force, police in many states have reopened old files to check for elements common with the sniper case. That three-week killing field left 10 dead and three wounded and brought charges from Virginia, Maryland and federal prosecutors.

In Michigan, Lansing police were following up with the sniper task force to check on any connection to the shooting death of a woman named Bernita White at a zoo entrance in June 2001. She was shot by someone hiding behind a fence about 200 yards away. The capital-area sniper also fired at long range.

"It's something we're looking into, but it's nothing formal," said police Lt. John Parks in Lansing. "You can't ignore it."

There is no known evidence that Muhammad and Malvo were in Michigan. However, a friend of Muhammad, who helped buy the car allegedly used in the sniper case, was arrested in Michigan as a material witness.

In Connecticut, state police were looking further into any links between a sniper killing on a highway ramp in January 2000 and the capital-area shootings. Mark Rebong, of Newtown, was shot while driving to work along Interstate 84.

"We certainly would look at any possible connection anywhere in the country," said state police Sgt. J. Paul Vance. It is not known if Muhammad or Malvo ever went to Connecticut.

Police have also linked Muhammad and Malvo to the February murder of a woman shot in the face at her door in Tacoma, Wash., possibly out of fury toward her aunt for taking sides with his ex-wife in a custody scrap. Police suspect them too in connection with shots fired at a Tacoma synagogue in May. No one was hurt.

Since Muhammad already faces a battery of charges elsewhere, Washington state prosecutors say they will wait to file anything.

Knowing Muhammad lived in Monterey, Calif., for about a year while in the military, the county sheriff's department scanned for any likely matches with all unsolved murders during that time. It came up empty, says Deputy Bill Cassara.

In Oregon, where Muhammad once served in the national guard, state police glanced back at several dozen sniping cases over the last deadD or so, without finding any matches, said spokesman Andy Olsen.

N.G. Berrill, who teaches about criminal behavior at John Jay College in New York City, said investigators should try to reconstruct every place where the men went — especially Muhammad.

"There's every opportunity and every possibility that if he ran out of money, there would have been a robbery. If he had become angry or disconsolate or highly agitated, he might have shot someone," he said.

"You would look at unsolved crimes that you had an itch to solve. I wouldn't confine it to a certain type of crime," added Jeffrey Smalldon, a forensic psychologist in Columbus, Ohio, who worked on the serial sniper case of Thomas Lee Dillon. Dillon pleaded guilty in 1993 to killing five strangers.

However, Clint Van Zandt, a former FBI agent who examined patterns of criminal behavior, suggested police could focus their search. "I think part of what they need to look for is unsolved assaults or homicides where it appears the victim was again chosen at random," he said.

Northeastern University criminologist Jack Levin, in Boston, who writes on serial murders, cautioned against scanning too aggressively for connections, because police could waste time and resources and finger the wrong suspect.

"When you've got guys like Muhammad and Malvo who are charged with crimes in a number of jurisdictions, there's a tendency for police departments around the country to want to clear their cases. Sometimes they go overboard," he said.

About 40 percent of all murders go unsolved.