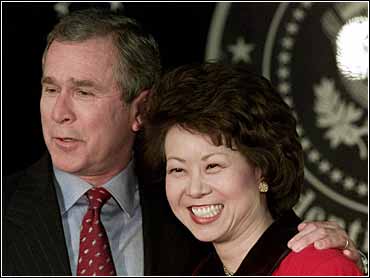 George W. Bush cut his summer vacation a bit short (leaving him three days shy of Richard Nixon’s record 30-day vacation in 1969), coming back to Washington for a day and a half of meetings before taking off for Camp David for the holiday weekend. Mr. Bush said his batteries were charged and he was raring to go, but that American workers face the fall with increasing anxiety about the economy and their workplaces.

The AFL-CIO labor union released a survey this week indicating that 68 percent of workers believe their rights in the workplace need more protection, and a increasing majority claims that management has too much power. Sixty-three percent say they have “just some” or “not much” trust in employers to treat employees fairly and 56 percent (up 12 points since 1996) say new laws are needed to hold corporations to a higher standard of responsibility toward workers.

The survey of 1,792 working adults (business owners were not included) between July 5-9, 2001, was done for the AFL-CIO by Peter Hart Research. The majority said their own economic situation was good although minorities and high tech workers expressed concerns about job security. Geoff Garin, who presented the results Thursday in Washington, said that the headline from the results is that workers don't think their employers are as loyal anymore. Looking at the last five years of economic good times, Garin said workers believe the people who benefited are the employers and the stockholders; looking ahead to an economic slowdown, workers think they will be the ones to sacrifice.

Garin says that in the focus groups he’s been conducting recently “all people talk about is their 401(k) accounts. They haven’t accumulated what they thought they would,” and they are very concerned about not having enough for retirement.

Some of the most intriguing results of the survey were the responses to questions about what rights people think they have at the workplace.