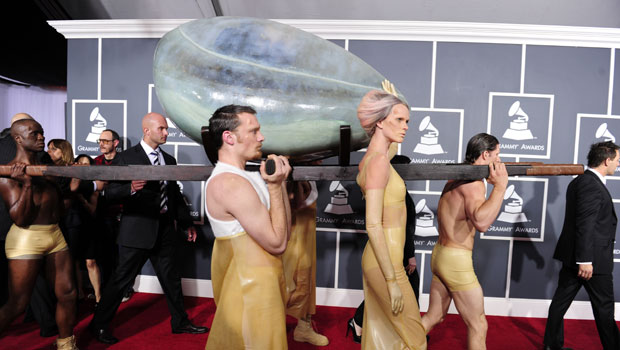 NEW YORK (CBS) Lady Gaga's  red carpet arrival at Grammy Awards did not disappoint - the singer, who is nominated for six awards, showed up on the red carpet in a giant, semi-transparent egg.

Gaga was carried down the carpet by five half-dressed attendees.

"This is Nicola, Haus of Gaga: Gaga is in incubation," stylist Nicola Formichetti posted on the singer's page. "Tonight's performance is in collaboration with Hussein Chalayan and House of Mugler. X"

Formichetti also wrote about the singer's arrival on his own Twitter account. "Grammys red carpet," he tweeted. "Lady gaga wears Mugler by nicola formichetti. Womb by hussein Chalayan. Gaga's pryers are in haus of gaga in collaboration with Mugler. My baby is been born."