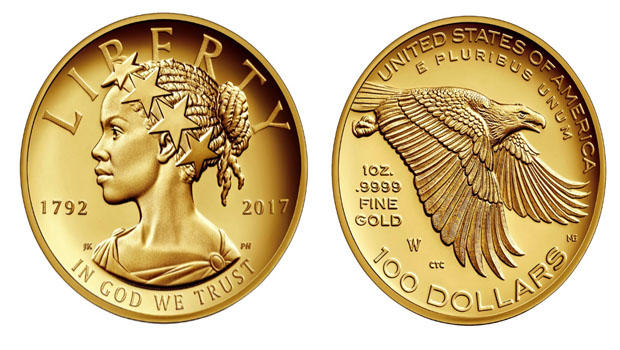 Lady Liberty will be depicted as a black women on a coin -- the first time in the nation’s history Lady Liberty has not been a white woman -- the U.S. Treasury Department announced on Thursday.

The coin, worth about $100 face value, is part of a commemorative series to honor the 225th anniversary of the U.S. Mint.

“The 2017 American Liberty 225th Anniversary Gold Coin is the first in a series of 24-karat gold coins that will feature designs which depict an allegorical Liberty in a variety of contemporary forms-including designs representing Asian-Americans, Hispanic-Americans, and Indian-Americans among others-to reflect the cultural and ethnic diversity of the United States,” the U.S. Treasury Department said in a statement.

The coin is part of a year-long celebration by the U.S. Treasury to celebrate the mint, and the theme will be “Remembering our Past, Embracing the Future.”

Several women have been featured on U.S. coins in the past. Susan B. Anthony was featured on the U.S. silver dollar from 1976 until 1981, and Helen Keller is on the Alabama state quarter. Sacagawea is featured on the $1 gold coins.

The new Lady Liberty coins will be available for sale in April.