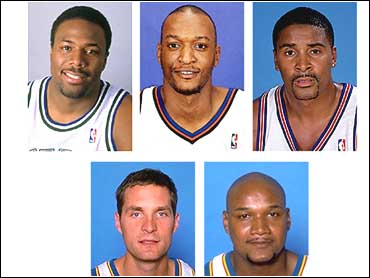 Christian Laettner, who almost went to the NBA champion Los Angeles Lakers in a proposed four-team deal, instead was traded Tuesday by the Detroit Pistons to Dallas.

Laettner and Terry Mills, another veteran forward, are going from Detroit to the Mavericks in exchange for forwards Cedric Ceballos and John Wallace, guard Eric Murdock and cash. Wallace and Murdock never played a game for Dallas, having been acquired by the Mavs in separate trades on draft night in June.

This deal is much less involved than the proposed megadeal earlier this month in which Laettner would have gone to the Lakers. That deal, which fell apart last week, also would have involved the SuperSonics and Knicks and included Patrick Ewing, Glen Rice and Vin Baker among at least 11 players included.

Detroit reportedly killed what would have been the largest deal in NBA history, and then reached an agreement Tuesday with the Mavericks.

Laettner (6-foot-11), a former first-round draft pick from Duke, averaged 12.2 points and 6.7 rebounds as he started all 82 games last season for Detroit. In his seven NBA seasons, he has averaged 15.7 points and 7.6 rebounds.

"This is another piece to our puzzle," Mavericks general manager and head coach Don Nelson said. "We felt that getting another big player was a priority this summer."

Laettner, who will split time with center Shawn Bradley and play forward in Dallas, was in the last year of his contract in Detroit. His contract is worth $6.7 million this season.

"Christian is a proven contributor who can bring rebounding, scoring and depth to our front court. Terry is a great 3-point shooter who will fit in nicely into Nellie's offense," Mavericks owner Mark Cuban said.