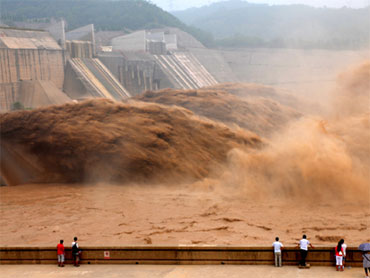 The landslides happened early in the morning in the province's Gannan Tibetan Autonomous Prefecture, the official Xinhua News Agency reported.

The local government confirmed the death toll and said information was still coming in on missing people.

The worst-hit part of Gannan was Zhouqu county, with Xinhua reporting that half the county was under water. Many houses had collapsed and streets were covered in one yard (meter) of mud and water.

It quoted the head of the county, Diemujiangteng, as saying the landslides happened after heavy rains lashed the country late Saturday and a river overflowed.

"Now the sludge (thick mud) has became the biggest problem to rescue operations. It's too thick to walk or drive through," he was quoted as saying.

Xinhua said at least 50,000 people were believed to be affected, and that power had been cut to the county.

It said officials were using helicopters to survey the damage.

The Lanzhou Military Area Command in the capital of the province dispatched 2,400 soldiers to help with rescue efforts.

Around China, the country's worst flooding in a decade has killed more than 1,100 people, with more than 600 still missing this year. The floods have caused tens of billions of dollars in damage across 28 provinces and regions.

Overall this year, about 875,000 homes have been destroyed, 9.61 million people evacuated, and 22 million acres (8.76 million hectares) of crops ruined, according to the government's flood control office.