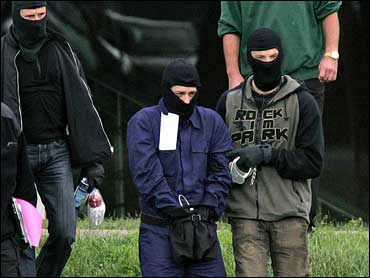 Three Islamic terror suspects arrested on suspicion of planning massive bombings in Germany may have been part of a larger network involving up to 50 people, an official said Saturday.

The three, arrested Tuesday in a raid on a vacation residence in central Germany, had allegedly stockpiled enough hydrogen peroxide to build bombs more powerful than those that killed 191 commuters in Madrid in 2004 and 52 in London in 2005. Officials said all three attended terror training camps in Pakistan last year.

German authorities believe two German converts and a Turk were only the leading tip of the planning, said Petra Kneuer, spokeswoman for the Federal Prosecutor's Office.

She said authorities were investigating seven more suspects inside and outside Germany as part of what could be a larger network, and that reports that about 50 people may be involved are "not unrealistic."

The two German suspects have been identified as Fritz Martin Gelowicz, 28, described as the leader of an Islamic Jihad Union terror cell in Germany, and Daniel Martin Schneider, 22. The third man has been identified as Adem Yilmaz, 29, born in Turkey but living in Germany.

Last New Year's Eve, one of the suspects was spotted studying a U.S. Army base at Hanau, near Frankfurt, and security officials say he may have been scouting it as a target.

Prosecutors have said potential targets might have included restaurants, pubs, discotheques, airports and other places frequented by Americans.

Joerg Ziercke, the head of the Federal Crime Office, said the arrests had disrupted the plan. "The peak of the danger has passed," he said.

Asked about a report in the news weekly Focus that the three men had obtained vans across the border in France, Kneuer said the purpose of the vehicles had not been determined.

"So far it hasn't been shown that there really was a link to the planned attacks," she told The Associated Press.

The three suspects allegedly belonged to the Islamic Jihad Union, an offshoot of the Islamic Movement of Uzbekistan, which has origins in that Central Asian country. The union is marked by "profound hatred" of U.S. citizens, officials said.

The extremism that fueled the alleged plot was cultivated in the city of Ulm, on the banks of the Danube River in southwestern Germany, security officials said.

Ulm, the birthplace of Albert Einstein, has been known for its cathedral, which has one of the largest church towers in the world. But in recent years it has become a hotbed of radical Islamic activity. Security officials said Gelowicz attended an Islamic center that was later closed by authorities as a security risk.

German politicians called Saturday on Islamic groups and communities in Germany to step up their commitment to the fight against terrorism. Interior Minister Wolfgang Schaeuble and Justice Minister Brigitte Zypries said Muslims should report potentially violent extremists to authorities.

"I am certain that the peace-loving Muslims in our country want to keep violent radicals from discrediting their faith community," Zypries was quoted as saying by the weekly Bild am Sonntag.