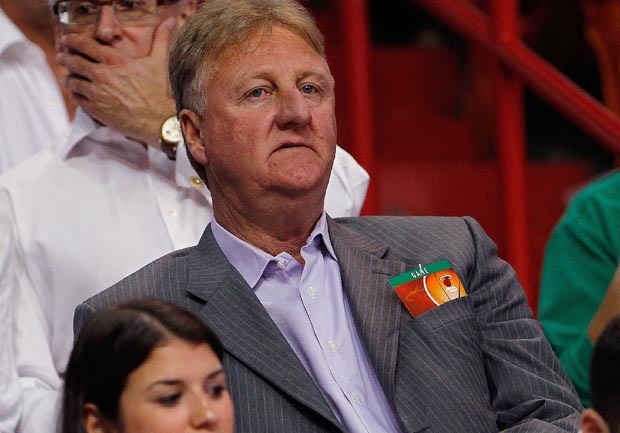 Bird told The Indianapolis Star early Wednesday that he "can't believe my team went soft" after the Pacers were beaten 115-83 in Game 5 of an Eastern Conference semifinal series Tuesday night against the Miami Heat.

Miami leads the series 3-2, with Game 6 on Thursday in Indianapolis.

Tuesday's game in Miami was marred by three flagrant fouls — one committed by Indiana's Tyler Hansbrough against Dwyane Wade, another by Miami's Udonis Haslem against Hansbrough moments after Wade was bloodied. The last was a particularly hard play by Heat reserve center Dexter Pittman against the Pacers' Lance Stephenson in the final seconds.

"I agree with his assessment. We did play soft," Indiana's Danny Granger said Wednesday. "We got smacked around. We got beat up, we got bullied, and we really didn't respond well.

"I've been with Larry since I've been in Indiana for seven years," Granger added. "He's not been one to hold his tongue, and 99 percent of the time what he's saying is right. I think he just called out what everyone else saw. We played a soft game. We didn't play with the playoff intensity that we needed to win."

Granger was in flip-flops when Wednesday's practice ended, saying the left ankle he sprained in Game 5 was still painful. Stephenson, who had X-rays taken to rule out any fractures to his collarbone or shoulder areas, did not practice.

"In my mind, I'm going to play," Granger said. "Elimination game, I have to play."

The Heat had a different reaction to Bird's comments. With the Pacers facing a win-or-else game Thursday, James thought Bird — recently announced as the league's executive of the year — wanted to provide extra incentive for Indiana.

"He's just trying to amp them up. That's all. That's all it is," James said. "He knows his team isn't soft. But with them, with their backs against the wall at this point, he knows what he's doing. He's not the executive of the year for no reason."

According to the Indianapolis star' Mike Wells, Pacers forward David West had this to say when asked about Bird's comments: "I don't know if that's for motivation."

All three of the flagrant fouls called Tuesday were category-1, meaning no players were automatically ejected. The league has a wide range of options available for its review process, including upgrading those fouls to category-2. The NBA could also issue fines and suspensions.

"I expect they will. That game was nationally televised," Granger said. "A lot of people saw the plays. I think they have to."

The NBA had made no public comment before either team finished practices Wednesday.

"All the chatter and all the stuff, it'll still end up being decided between the lines," Heat coach Erik Spoelstra said. "And it'll be decided by the rules of the game."

Wade sounded somewhat amused that Granger — who's been whistled for three technicals in the series — was one of the Pacers suggesting Haslem and Pittman should be suspended. Wade and Granger have had words during the series.

"We're not in here crying about the fouls," Wade said. "They fouled us. ... We're moving on to Game 6. We're not going to worry about what happened in Game 5. For us, it's about moving forward."

There were a number of other hard fouls in Game 5 that were not considered flagrant but continued the trend of what's become a physical series. West — who left Tuesday's game with what the team called a sprained knee, though he insisted Wednesday he was not hurt — took exception to a play where he was knocked backward, saying a Heat player fell into his knee.

Not long afterward, he fouled James, who said he saw it coming.

"He was the one on the floor and I was the one still standing," James said. "So I started laughing at that. But he tried to get me."

Indiana coach Frank Vogel called Miami floppers before the series started, and it's been gritty throughout. The teams combined to shoot 66 free throws in Game 1, and there have been a combined nine technicals and flagrants called in the four games since. Other dustups included Stephenson making a choke sign that television cameras caught during Game 3, and Juwan Howard confronting him about his antics before Game 4.

"It's been a physical series, started by them," Wade said.

The Pacers practiced in Miami before flying home Wednesday, a somewhat uncommon move but one that Vogel wanted in an effort to keep his team on a relatively normal sleep schedule.