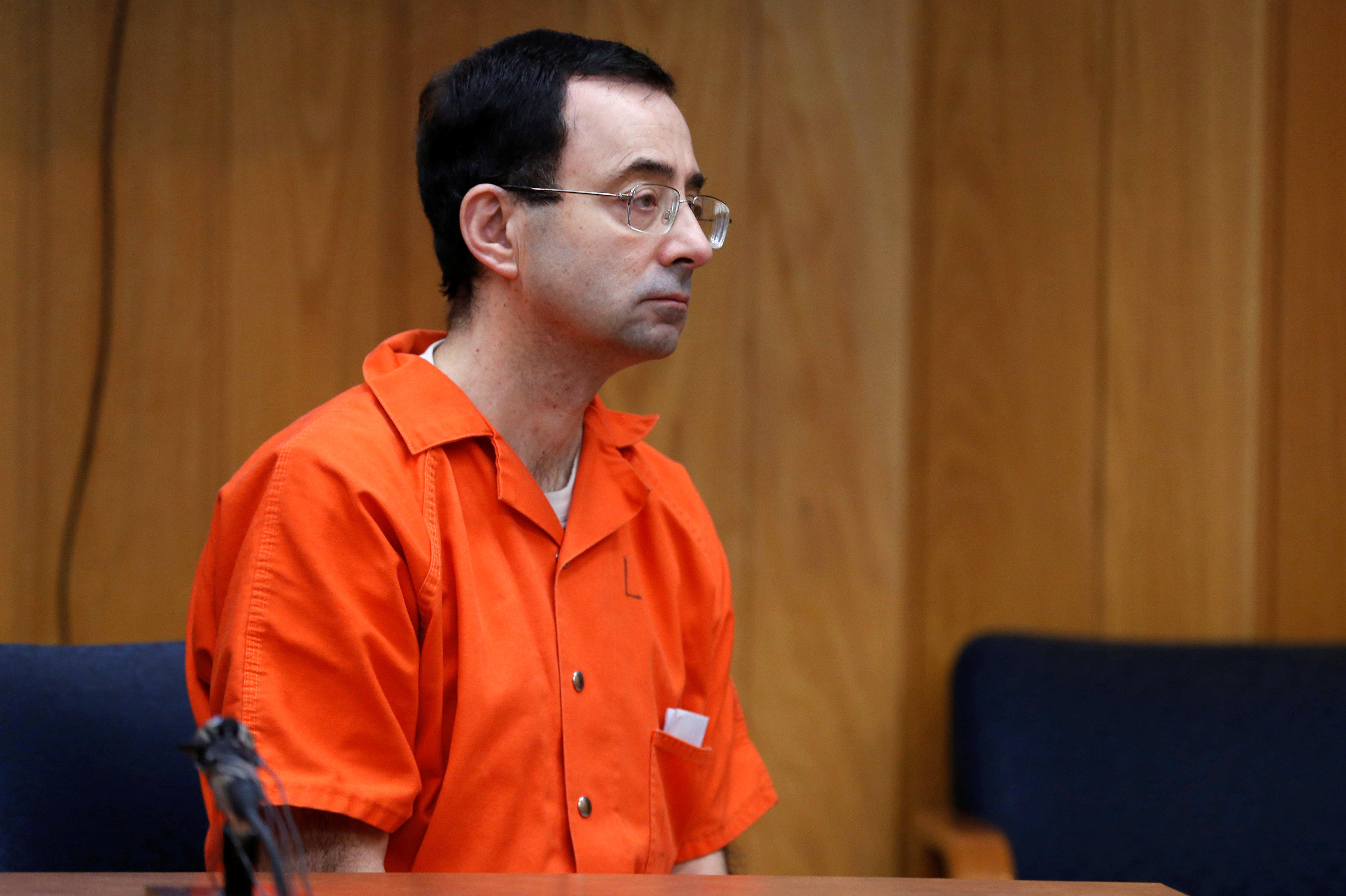 CHARLOTTE, Mich. -- The former sports doctor whose serial sexual abuse of girls and young women upended the gymnastics world was sentenced Monday to a third prison term of 40 to 125 years for molesting young athletes at an elite Michigan training center. Larry Nassar listened to dozens of victims for two days last week and was almost attacked by a man whose three daughters said they were abused.

Nassar's final sentence comes after he pleaded guilty to penetrating young athletes with ungloved hands when they sought treatment for injuries at Twistars, a gymnastics club that was run by a 2012 U.S. Olympic coach.

Nassar's conduct "robbed these girls and women of one of the most truly important human qualities: trust," Judge Janice Cunningham said.

The sentence is largely symbolic because the 54-year-old is already assured of spending the rest of his life in prison. Before serving either of his two state sentences, he must first serve 60 years in federal prison for child pornography crimes.

Besides the sentence delivered Monday in Eaton County, Nassar was also sentenced last month to 40 to 175 years for similar conduct in another county. Those sentences would be served at the same time.

In a brief statement before he was sentenced, Nassar attempted to apologize to his victims.

"It's impossible to convey the breadth and depth of how sorry I am to each and every one," he said.

In all, more than 260 women and girls have reported being molested by Nassar, who worked for Michigan State and USA Gymnastics, the sport's governing body, which also trains Olympians.

Some of the cases date back to the 1990s. The judge said the abuse "spans the country and the world."

On Friday, Randy Margraves was tackled by sheriff's deputies before he could pummel Nassar in court. He said he wanted just a minute in a locked room with the "demon."

"This cannot be a lawless society. I know that," Margraves told reporters during a public apology. "I lost control, but I gained control later in a holding cell."

Assistant Attorney General Angela Povilaitis said people must stop blaming the victims and their parents - who've been attacked online, on the radio and elsewhere.

She said people are taught to trust doctors above all, especially those who appear to be world-class.

"It could have happened to any parent," she said. Nassar fooled police officer parents, doctor parents and engineer parents. "Regardless of their profession, he fooled them all."

Most victims who wanted to speak publicly or submit a statement did so earlier during Nassar's seven-day court hearing in Ingham County, including 2012 Olympic teammates Aly Raisman, Jordyn Wieber and McKayla Maroney.

Larissa Boyce, who reported Nassar to Michigan State's gymnastics coach in 1997, said the shared experience of the victims will make them "sisters for life."

She said she hopes that the university and USA Gymnastics will "show the world how this was missed, the mistakes that were made ... so that other people can take a look and make changes where they need to make changes so this never happens again."

The scandal has rocked Michigan State, which has been accused of repeatedly missing opportunities to stop Nassar, who had a campus office and was a revered figure in sports medicine.

The longtime leader of USA Gymnastics, Steve Penny, quit last March, and all board members recently stepped down at the demand of the U.S. Olympic Committee. A law firm has been hired to investigate how the USOC responded to its knowledge of allegations against Nassar.

Rachael Denhollander, who filed a police report after reading a 2016 Indianapolis Star investigation into USA Gymnastics, said more work remains to be done, even after Nassar is sent away.

"We would not be here had the adults and authorities done what they should have done 20 years ago. We have taken care of one perpetrator. We have not taken care of the systems that allowed him to flourish for 20 years," she said.

She blasted the university for continuing to fight victims' lawsuits.

"At every turn, they have twisted words. They have refused to answer questions. They have put institutional protectionism ahead and above" the victims.