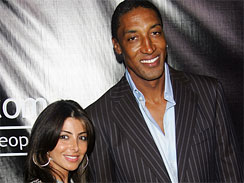 The city that brought you Horatio Caine and Crockett and Tubbs is now set to introduce Larsa Pippen and the other "Real Housewives of Miami."

"The "Real Housewives of New York City" appears to be on hold as its fourth-season mid-February premiere spot gets turned over to the "Real Housewives of Miami," which will debut Feb. 22. Larsa Pippen, wife of retired NBA superstar Scottie Pippen, seems to be the biggest name in the bunch.

Larsa and Scottie have four kids and the New York Daily News reports that she's been called the "hottest NBA wife."

According to People.com, the other housewives are:

Marysol Patton, a Miami native who runs a PR firm.

Adriana DeMoura-Sidi, who's recently engaged and, according to People, gets in trouble because of her personality.

Need some heat? "Real Housewives of Miami" looks to be a good antidote for the rotten winter weather that's got half the United States buried under freezing temperatures.