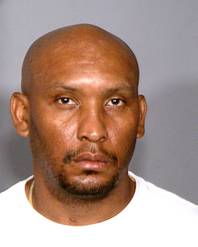 (CBS) NEW YORK - Raymond Christopher Sharp, a convicted Las Vegas pimp, was sentenced to 13 life terms in prison Tuesday for a wide variety of charges, including, kidnapping, pandering with force, battery, burglary and coercion, according to the Las Vegas Sun.

Clark County District Judge Elissa Cadish found Sharp, 47, to be a repeat offender and sentenced him to life without parole on the first degree kidnapping with a deadly weapon charge. The other charges allow for the possibility of parole after ten years, reported the Sun.

On July 2, 2011, police responded to reports that a half-naked woman was knocking on the doors throughout Sharp's neighborhood. A witness told police that a man then dragged the woman inside by the hair, according to the Sun.

Police later discovered the woman in Sharp's residence. Further investigation revealed that Sharp was a registered sex offender, and was in possession of illegal firearms.